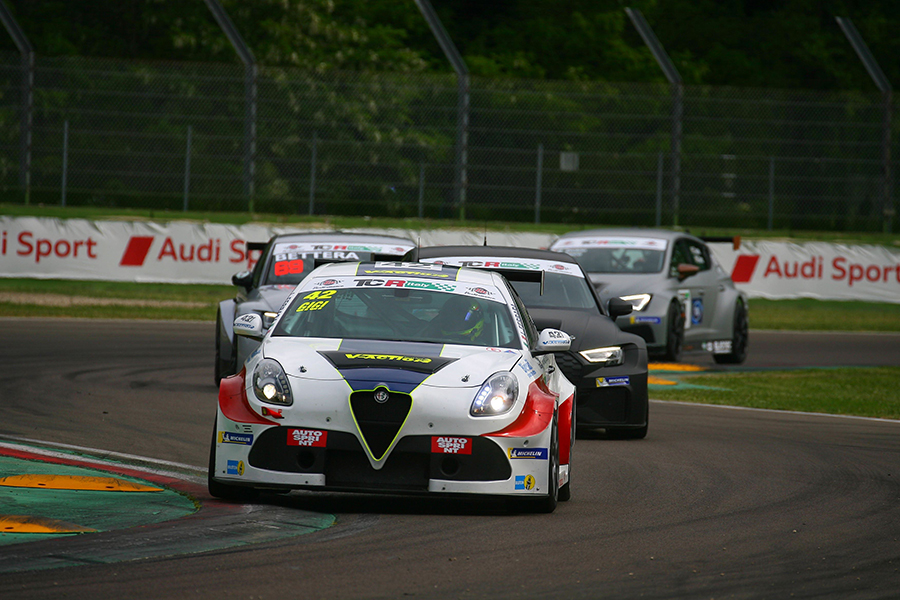 Double win for Ferrara in an exciting Race 2

Luigi Ferrara rounded a perfect weekend for himself and the V-Action Racing Team bringing the Alfa Romeo Giulietta to a second win in Race 2 of the TCR Italy season-opener at Imola. The all-Italian package beat the Audi RS3 LMS of Enrico Bettera and the Cupra of Andrea Larini.
Race 2, which started behind the safety-car because a sudden shower a few minutes before formation lap and with Giovanni Altoè on pole on the reverse grid, was an intense and breathtaking show on a drying track from the moment the cars were released and offered many close duels, incidents and off-tracks.
Altoè kept the lead only for a few corners, with Austria’s Jürgen Schmarl (Target Competition Honda Civic) succeeding him for a short while, before being passed by an inspired Lorenzo Nicoli. Unfortunately, the driver of the MM Motorsport Honda Civic had to serve a drive-through because of an infringement during the safety-car period, dropping to P23. Andrea Larini then took the lead ahead of José Rodrigues, Schmarl, Ferrara and Bettera. The Alfa was clearly the fastest and most effective car on track and seven minutes from the end, Ferrara took the lead, with a perfect overtake on Larini. Also charging from the back was Bettera, who secured second over Larini in the penultimate lap, while Matteo Greco, Baldan, Rodrigues (victim of a spectacular high-speed excursion on the grass) completed the top-6, and Altoè (7th) repeated success in the DSG class. The race was red-flagged in the last lap because of an accident in the straight between Volpato and Kralev, which left many debris and the cars stranded on the track.
The TCR Italy will resume at Le Castellet on May 11/12.