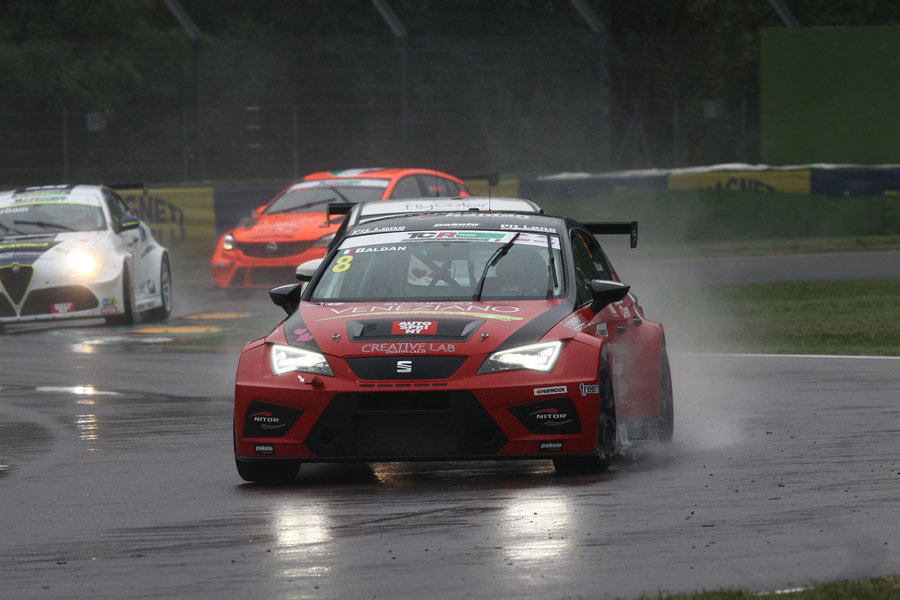 After a disappointing first race at Imola, Nicola Baldan of Pit Lane Competizioni emerged as the winner in a second race that was annihilated by the safety car interventions.
Due to the pouring rain, the race distance had been reduced from 25 minutes plus one lap, to 20 minutes plus one lap. The field started behind the safety car that circulated for three laps before entering the pit lane with only 11 minutes left on the clock.
Pole sitter Baldan took command in his SEAT León, followed by Eric Scalvini (MM Motorsport Honda Civic), Giacomo Altoè (V-Action Racing Alfa Romeo Giulietta) and Kevin Giacon (Tecnodom Opel Astra). During the opening lap the Audi cars of Massimiliano Mugelli and Plamen Kralev made contact at the Tosa bend; they both rejoined at the back of the field. Soon afterwards Massimiliano Gagliano’s Volkswagen Golf and Alessandro Thellung’s SEAT collided at the Rivazza bend, prompting the safety car once again.
For another three laps the race was neutralized and it resumed on lap 8 with only two laps to go.
At the front, Baldan was fighting to keep Scalvini and K. Giacon at bay, while Stefano Comini was completing a fantastic recovery at the wheel of the Top Run Subaru WRX STI. Started from 13th on the grid, the Swiss racer had climbed to seventh before the safety car’s intervention; during the two final laps, Comini managed to overtake Joakim Darbom’s Giulietta, Race 1 winner Jonathan Giacon’s Honda and finally Altoè to finish a brilliant fourth just behind the leading trio of Baldan, Scalvini and K. Giacon. He also set the race’s fastest lap in the process.
Baldan’s winning margin ahead of Scalvini was of 4 tenths, while the top six drivers classified were all covered by 2.6 seconds.
These results meant that Baldan reduced his gap from Scalvini in the championship standings to two points only, with two race meetings left. TCR Italy’s next event will be at Vallelunga on 23/24 September.