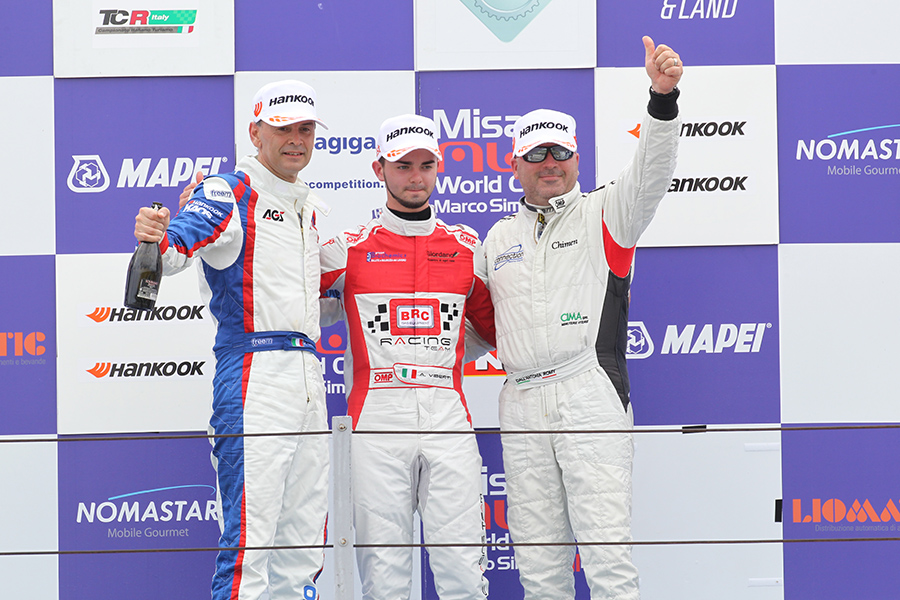 The second race meeting of the Italian Touring Car Championship (CIT) at Misano saw Roberto Colciago (AGS Motorsport Honda Civic) and Alberto Viberti (BRC Racing Team SEAT León) taking one victory apiece at the end of an eventful weekend.
Both Colciago and Viberti (first and second in the Drivers’ championship after the first race meeting) met with technical issues in Friday’s Qualifying. Colciago missed both sessions due to an engine failure, while Viberti was sidelined in the first session by a broken driveshaft. This meant that Imerio Brigliadori (BF Motorsport SEAT León) claimed pole position for Race 1. The BRC Racing Team Crew was able to replace the driveshaft and send Viberti on track with a few minutes left of the second session; one lap was enough for him to secure the pole for Race 2.
Saturday evening, during the first race, Viberto and Colciago completed a great recovery from the back of the grid and on Lap 3 they overtook the early leader Samuele Piccin moving up to first and second. For the following three laps Viberti was able to close all the gaps and kept Colciago at bay, but suddenly on lap 7 the leader slowed down and pitted, again with a broken drive shaft. The second part of the race turned into a parade for Colciago’s Honda Civic that won with a comfortable margin from the SEAT cars of Brigliadori and Piccin.
The second race, on Sunday morning, saw Viberti taking the lead and trying to create a gap, while Colciago was recovering from the back of the grid once again. On lap 2 Colciago overtook Vincenzo Montalbano for second place and began to reduce his 6-second gap from the leader Viberti. Lap after lap Colciago got closer to Viberti and eventually overtook him on lap 15; in the action the two cars made a hard contact, which affected the handling of Viberti’s car. The Stewards considered Colciago’s manoeuvre over the limit and imposed a 5-second penalty that demoted him to second place behind Viberti. Dall’Antonia claimed the third position after a close battle with Montalbano, Daniele Cappellari and Marco Costamagna.
Colciago maintains a solid margin on top of the Drivers’ Championship that he leads with 81 points, 30 more than Viberti (51); the pairing of Samuele Piccin and Romy Dall’Antonia lies in third position (39 points).
The event was also valid as the second round of the TCR Trophy Europe.
The Italian Touring Car Championship will resume at Magione on July 2 and 3 for rounds 5 and 6.