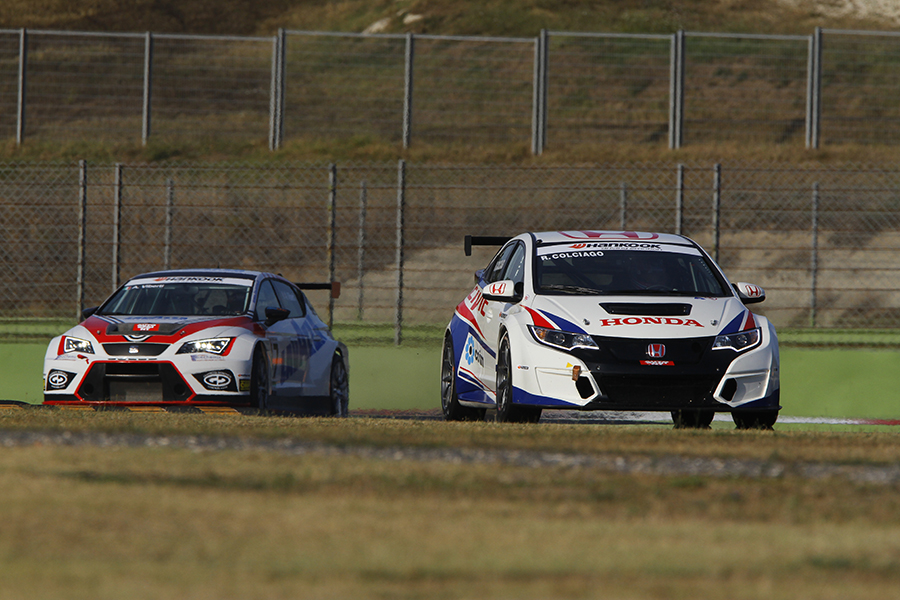 Roberto Colciago and his Honda Civic claimed a double victory at Vallelunga in the fifth event of the Italian Touring Car Championship. The AGS Motorsport man improved his seasonal tally to eight wins out of ten races and moved a further step closer to the TCR Italy title. With his rival Alberto Viberti (BRC Racing Team SEAT León) finishing second behind him in both races, Colciago has stretched his leading margin in the standing to 54 points, when 88 will be still available in the two final events.

Race 1 – Jimmy Ghione (BRC Racing Team), third in qualifying, pitted at the end of the warm-up lap due to electrics problems. Pole sitter Colciago took the lead at the start from Viberti and Daniele Cappellari (Team Bassano).
The race was disrupted by the safety-car from lap 3 to lap 5, after a TCS car crashed; at the restart Viberti managed to steal the lead from Colciago but on lap 6 the latter benefited from a mistake of his rival and retook the first position for good.
Positions did not change despite a second intervention of the safety car following a collision between Ghione and a slower car.

Race 2 – Colciago took another lights-to-flag victory as he managed to keep at bay Viberti for the whole race, although the BRC Racing Team driver was chasing him closely and crossed the finish line only four tenths behind.
In the fight for the third place, Cappellari overtook Ghione during the opening lap and increased his gap consistently.

The Italian Touring Car Championship will resume at Imola on September 24 and 25, for rounds 11 and 12.