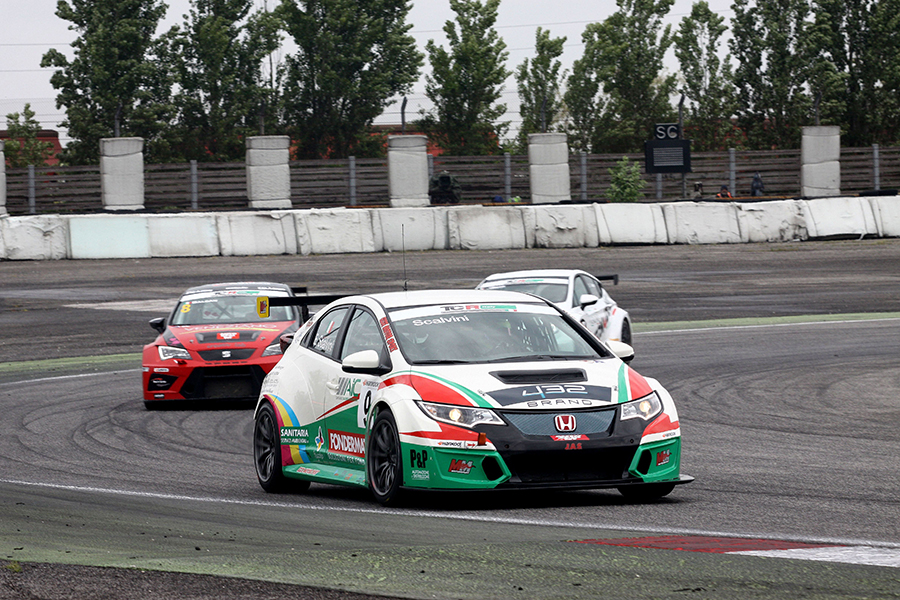 Eric Scalvini of MM Racing began his maiden season in the TCR Italy claiming a double victory at the wheel of his Honda Civic Type-R on the occasion of the season opener at Adria International Raceway.
In both races, Scalvini was joined on the podium by Jonathan Giacon – who had set pole position in the TecnoDom Sport Opel Astra – and Nicola Baldan in the PitLane Competizioni SEAT León.

On Saturday evening, under a pouring rain, Eric Scalvini drove his Honda to a lights-to-flag victory, while pole sitter’s Jonathan Giacon had to settle with second after a mistake that was caused by a faulty anti-mist system of his Opel.
Pit Lane Competizioni teammates Nicola Baldan and Massimiliano Mugelli (Audi RS3 LMS) were classified in third and fourth, while Bulgarian driver Plamen Kralev (Kraf Racing Audi) lost his sixth place as he was excluded for not observing a drive through penalty.
The second race on Sunday morning was run on a drying track and provided a thrilling fight between the same trio of Scalvini, Giacon and Baldan who exactly replicated the podium of Race 1. Giacon was on pole, but took a poor start and was pipped by Scalvini and Baldan. Scalvini led for the whole distance and was able to create a gap in the second half of the 20-lap race. Baldan kept the second position until the last lap, when Giacon managed to overtake him.
The two Audi cars of Mugelli and Kralev were eliminated in a contact on lap 6.

The TCR Italy will resume on June 3 and 4 at Misano.