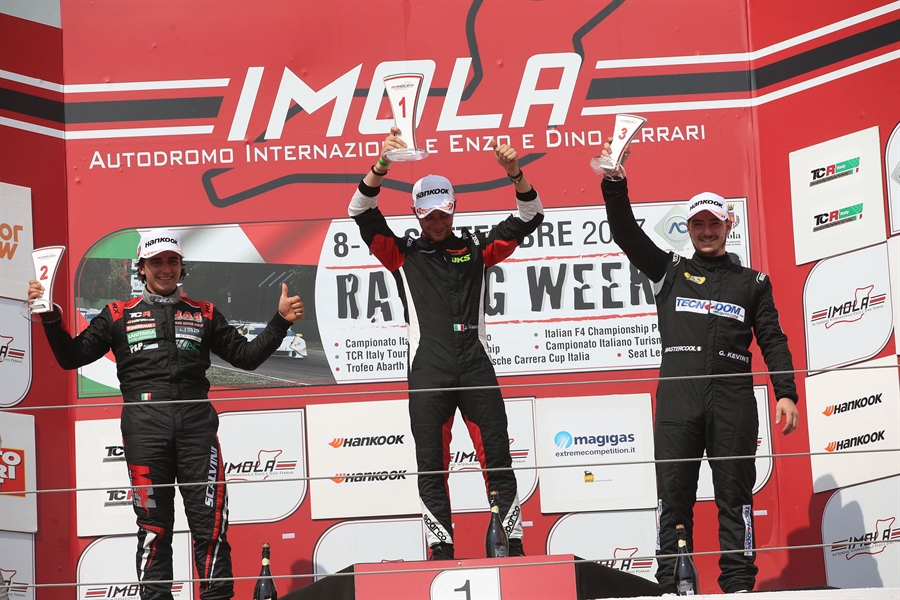 The two MM Motorsport Honda Civic cars of Jonathan Giacon and Eric Scalvini finished first and second in the TCR Italy’s Race 1 at Imola, while Giacon's broter, Kevin, completed the podium in his Opel Astra.
It was a thrilling race, from the start to the end, which propelled Scalvini back to the top of the standings, while his rival in the title fight – Nicola Baldan of Pit Lane Competizioni – dropped out of the points following a drive through.
At the start, pole sitter Baldan made a false start that enabled J. Giacon and Stefano Comini to sprint ahead of the field. Behind them, the Alfa Romeo Giulietta of Giacomo Altoè collided with Plamen Kralev’s Audi RS3 LMS and Baldan’s SEAT León. Altoè crashed against the barriers, prompting the safety car.
When the race resumed, Comini in the Top Run-built Subaru WRX and Scalvini were chasing the leader J. Giacon.
Unable to find a gap, Comini was passed by Scalvini and found himself fighting for the fourth place with Kralev and Baldan. On lap 5, the Swiss driver went off at the Villeneuve chicane after clashing with Kralev and retired. Soon afterwards, Baldan was given a drive through for jump-start.
In the second half of the race, J. Giacon’s leadership was seriously threatened by Scalvini and Kralev, but the latter was given a 20-second stop-and-go for having caused the incident with Altoè.
During the final lap, Scalvini tried desperately to overtake J. Giacon who was able not to open the lesser gap and claimed his first victory in TCR Italy by a slim margin of 0.138 seconds. Behind them, K. Giacon won the fight for the final step of the podium, rejecting the assaults of Joakim Darbom (Alfa Romeo) who eventually lost fourth to Finlay Crocker (Honda Civic).
In the championship standings, Scalvini leads by eight points ahead of Baldan who will start the second race from pole position again, tomorrow at 11:00.