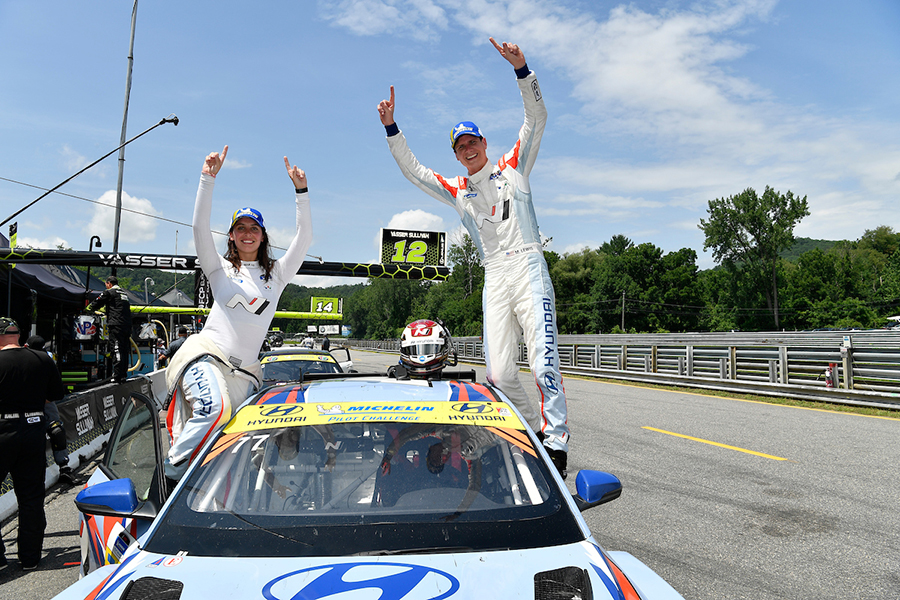 The Bryan Herta Autosport Hyundai Veloster N shared by Taylor Hagler and Michael Lewis won the TCR class in the sixth round of the IMSA Michelin Pilot Challenge at Lime Rock. This was Lewis’ first victory in the current season and the first ever in the series for lady driver Hagler.
There was no margin for error as Lewis made the pass for the lead with six minutes to go and finished off a frantic final stint to win by just 0.134 seconds over Tim Lewis in the KMW Motorsports with TMR Engineering Alfa Romeo Giulietta Veloce. The second place for Tim Lewis and co-driver Roy Block was the first podium finish in the Michelin Pilot Challenge for the team and Alfa Romeo.
Tyler Maxson was third in the Copeland Motorsports Hyundai Veloster co-driven with Tyler Gonzalez who had earned the pole position on Friday.
The fight for the fourth position saw the JDC-Miller MotorSports Audi RS 3 LMS of Chris Miller-Mikey Taylor beating the Bryan Herta Autosport Hyundai Elantra N of Mark Wilkins-Harry Gottsacker by 81 thousandths of a second.
In the standings, Michael Lewis and Hagler have extended their lead to 250 points over Ryan Eversley (Atlanta Speedwerks, Honda Civic Type R), while Parker Chase (Bryan Herta Autosport, Hyundai Elantra N) ranks third a further 40 points adrift. Tim Lewis and Block have moved up into the fourth position, 50 points behind Chase.
The IMSA Michelin Pilot Challenge will resume on August 7 at Road America in Elkhart Lake, Wisconsin.