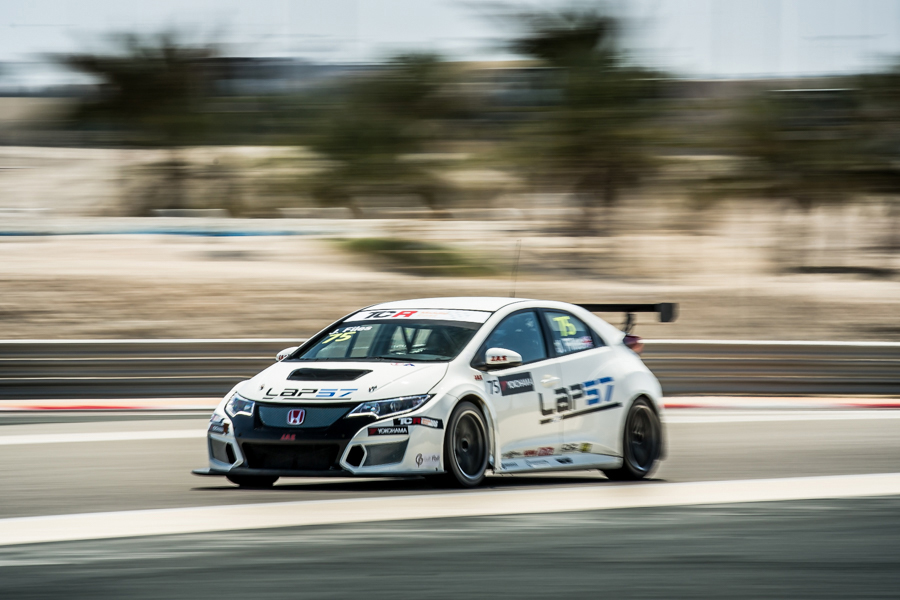 Josh Files conquered the pole at Bahrain International Circuit after an intense and hard-fought battle for pole. The British driver of the Lap 57 Honda Civic beat Davit Kajaia, with the Mulsanne Racing Alfa Romeo Giulietta, by only 68 thousandths of a second, with third-fastest Luca Engstler (Liqui Moly Team Engstler Volkswagen Golf) conceding only 101 thousandths to the poleman, in a result that saw three different car brands represented in the top three and promises a fierce battle in tomorrow’s races.
In a warm afternoon, the session saw an early domination by Engstler (1.09.660) before Files took P1 with a lap time of 1.09.689. Shortly after mid-session; then the qualifying turned into a very tactical session, as all drivers stopped to preserve their tyres.
In the closing minutes, a raging battle delivered the final result, with Files holding narrowly the pole ahead of Kajaia and Engstler. They were followed by the other Liqui Moly Team Engstler Volkswagen Golf cars of Brandon Gdovic and Giacomo Altoè. The US driver was happier with the behavior of his car but regretted not having been able to get his best sector times in a sequence, while the young Italian deliberately kept a set of front tyres for the races tomorrow.
Race 1 will kick-off at 12:02 local time (10:02 in Central Europe), while Race 2 is scheduled at 15:45 (13:45 CET).