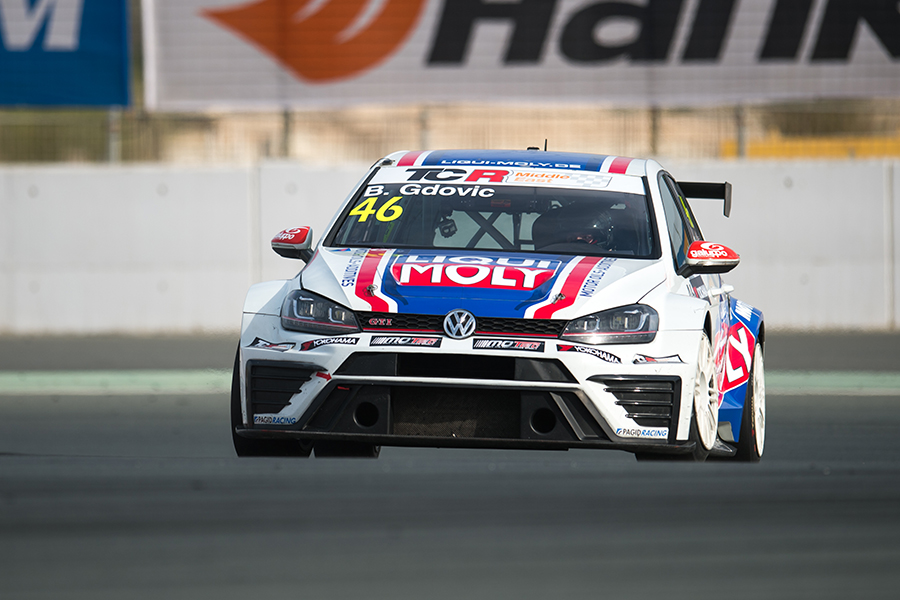 Brandon Gdovic claimed a brilliant victory at the end of an eventful race, beating Mat’o Homola and an impressive James Kaye who was deprived by a penalty of a first podium result in the debuting Audi RS 3 LMS.
The race was quite exciting, despite the field lost the Top Run Subaru before the start and the Red Camel SEAT in the early stages. For eight of the twelve laps there was a close battle for the first positions, with six drivers – Gdovic, Homola, Filip Sládecka, Luca Engstler, Kaye and Michela Cerruti – running one behind the other.
Kaye managed to bring his Audi to the lead with two laps to go, but eased down his pace when he was informed that the Stewards had imposed him a time penalty for a clash with Sládecka.
This helped Gdovic to win ahead of Homola and Sládecka in a 1-2-3 finish for Volkswagen and the Liqui Moly Team Engstler.

Key facts
Grid – Ferrara’s Subaru can’t join because the bevel gear broke down in the first race
Formation lap – Pole sitter Astin comes back to the pit at the end of the lap
Start – Goede stalls his engine; Sládecka takes the lead from Kaye and Homola
Lap 1 – Cerruti overtakes Gdovic for fourth
Lap 2 – Homola overtakes Kaye for second; Gdovic retakes fourth from Cerruti
Lap 3 – Astin – who had rejoined after pitting – retires with a tyre problem
Lap 4 – Engstler and Cerruti fight door-to-door; Engstler moves up to fifth
Lap 5 – Sládecka, Homola and Kaye have a close fight for the lead; Cerruti overtakes Engstler for fifth
Lap 6 – Gdovic closes in on the leading trio; Sládecka defends the lead, Kaye takes the advantage and moves up to second ahead of Homola
Lap 7 – Engstler overtakes Cerruti again for fifth
Lap 8 – Cerruti retires with a broken suspension
Lap 9 – Kaye is chasing Sládecka closely and takes the lead; Homola moves up to second
Lap 10 – the top five are within nine-tenth; Sládecka and Kaye clash; Kaye keeps the lead; Gdovic overtakes Engstler and Sládecka, moving up to second
Lap 11 – Kaye slows down having been informed he has received a time penalty and drops to third; Gdovic takes the lead from Homola
Lap 12 – Gdovic wins from Homola and Sládecka