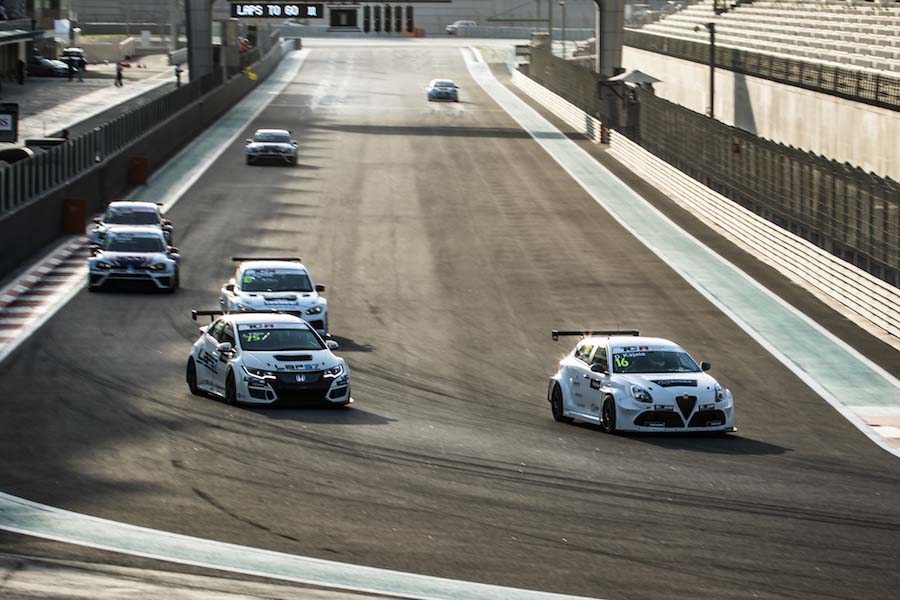 Josh Files, driving for the UAE-based Lap57 team, took his first victory in the TCR Middle East series after earlier setting the fastest time in both the Practice and Qualifying sessions. The Honda Civic driver didn’t have an easy run to the chequered flag, however, as the Mulsanne Racing Alfa Romeo Giulietta of Davit Kajaia led for eight of the race’s eleven laps. Files eventually took the lead on Lap 9.
Behind the race-long battle for the lead, Italian teenager Giacomo Altoè drove a solid race to give the Top Run racing team their first international podium result by finishing third in the Subaru WRX STi TCR. Brandon Gdovic finished fourth for Liqui Moly Team Engstler, while Mohammed Al Owais was classified fifth in a Honda after stopping on track on the final lap. Similarly, Luca Engstler and Stefan Goede failed to finish the race but were classified sixth and seventh respectively.

Key facts
Start – Mohammed Al Owais stalls on the start line and drops to the back of the field
Lap 1 – Files makes a poor start and Kajaia passes him for the lead; Engstler is up to 5th after starting from the back of the grid; Goede is up to 4th
Lap 3 – The battle for the lead continues, with Files and Kajaia now 0.5 seconds apart; Goede spins at Turn 17 but rejoins.
Lap 4 – Engstler and Gdovic are fighting for 4th while Goede enters the pits
Lap 5 – Gdovic now 0.4 seconds behind Engstler
Lap 6 – The gap between the leaders is now 0.27 seconds
Lap 7 – Files attacks Kajaia, but Kajaia holds on to the lead; Al Owais passes Gdovic for 5th place
Lap 8 – Files runs wide at Turn 14; him and Kajaia make contact at Turn 18
Lap 9 – There is a three-way battle for 4th place between Engstler, Al Owais and Gdovic; Files attacks Kajaia at Turn 18, but Kajaia holds onto the lead; Files manages to pass Kajaia for the lead at Turn 20
Lap 10 – Gdovic attacks Engstler for 5th place, but Engstler holds the position
Lap 11 – There’s contact between Gdovic and Engstler; Gdovic resumes, but Engstler stops at Turn 14; Al Owais stops at Turn 11; Files holds on to win from Kajaia by just 1.3 seconds; Altoè is a further 21 seconds behind