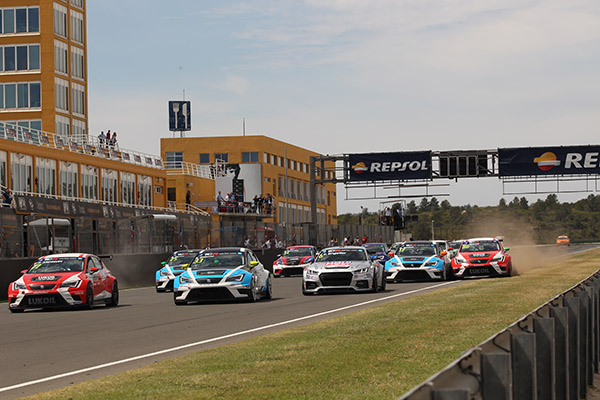 TCR resumes in Portugal without a break

Only a few days after racing at Valencia, the TCR International Series will convene at the Autódromo Internacional Algarve, Portugal, for Rounds 7 and 8.
On this modern racetrack that is located on the Southern coast, not far from the regional capital of Faro, Target Competition and Stefano Comini will defend their leads in the Teams’ and Drivers’ championships.
With his victory in Valencia’s second race, Comini re-gained the leadership and now has a 15-point advantage over Gianni Morbidelli. Pepe Oriola, who became the fifth different winner so far in the series thanks to his victory in Valencia’s Race 1, lies a further two points adrift.
In the Team’s Classification, Target Competition leads from Craft-Bamboo Lukoil and WestCoast Racing with margins of 41 and 46 points respectively.
The programme of the Portuguese event will follow the same pattern as last week’s: Saturday will feature two thirty-minute Free Practice sessions and one thirty-minute Qualifying, split into Q1 (20 minutes for all drivers) and Q2 (10 minutes for the fastest twelve in Q1).
The two races will then take place on Sunday, back-to-back over a distance of 60 kilometres.
In addition to this, on Friday teams will be given the opportunity to take part in a two test sessions, from 9.00 to 12.00 and from 13.00 to 17.30.