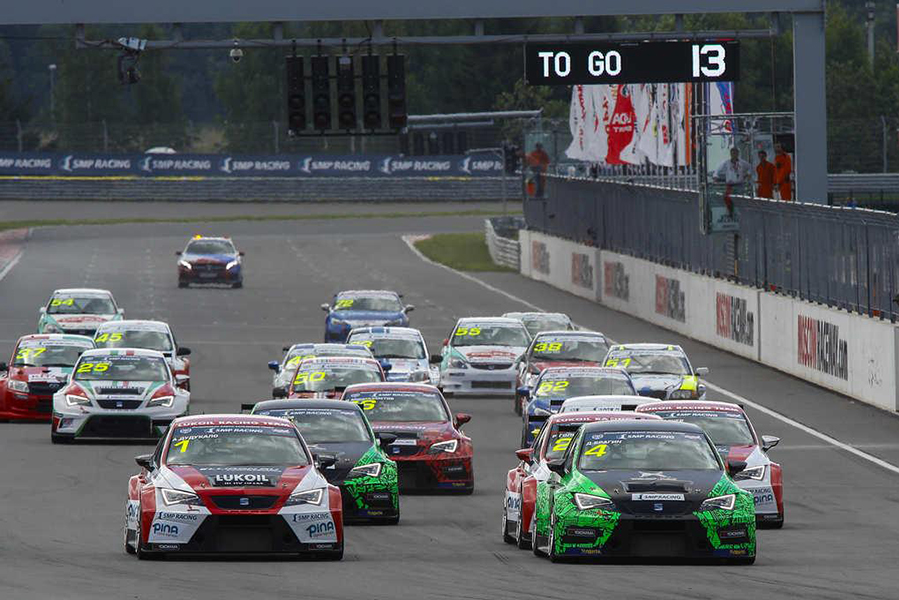 The fifth event of the SMP Russian Circuit Racing Series took place at the Moscow Raceway, where Aleksey Dudukalo (Lukoil Racing) managed to reduce by fourteen points his gap from Dmitri Bragin (TAIF Motorsport), the current leader of the Touring class for TCR cars.
Bragin had won Race 1 from Dudukalo and the other Lukoil Racing drivers, Roman Golikov and Nikolay Karamyshev. However, after being involved in a multiple collision at the start, Bragin could only salvage a fifth place in Race 2, while Dudukalo claimed a comfortable win beating Yashin and Karamyshev.
With four races still to go, Bragin’s leading margin on Dudukalo has shrunk to 24 points.

Race 1: Bragin took advantage of his pole to keep Dudukalo at bay, then closed the inside gap and frustrated Karamyshev’s attempt to pass. Golikov seized his chance and moved up to third ahead of Karamyshev.
For the rest of the race Dudukalo shadowed Bragin, putting pressure on him; the gap between them never exceeded half-a-second, however Bragin did not offer the lesser opportunity to his rival and successfully defended his leadership until the chequered flag. Golikov completed the podium ahead of Karamyshev and Pavel Yashin (Neva Motorsport).

Race 2: Marat Sharapov (TAIF Motorsport) and Lev Tolkachev (Innocenti-AMG Motorsport) shared the front row on the reverse grid; the fight for the lead resulted in two different collisions that involved the top drivers. Karamyshev spun off, Bragin dropped back, while the cars of Golikov and Irek Minnakhmetov were seriously damaged. The latter spun and Golikov stopped on the track, which prompted the safety car on the track. When the race resumed, on lap 6, Dudukalo was leading from Yashin and Sharapov; both Bragin and Karamyshev were recovering positions amidst the Super Production cars.
On lap 9, Yashin overtook Sharapov for second, while Karamyshev moved up to fourth, ahead of Bragin whose car was completely off balance. On lap 10 the safety car was deployed again while a Super Production car was limping around.
The race restarted with three laps to go. Karamyshev managed to pass Sharapov for third, but was unable to catch up with Yashin; Bragin salvaged his fifth place despite being chased by a bunch of Super Production cars.

Rounds 11 and 12 of the SMP Russian Circuit Racing Series will take place at Smolensk Ring on August 27 and 28.