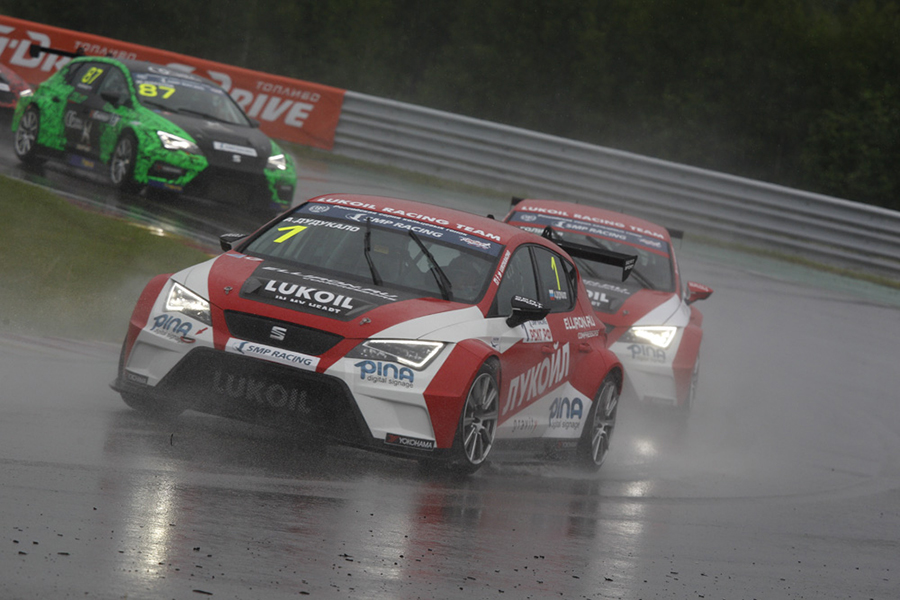 Dmitry Bragin crossed the line first at the end of an impressive recovery on a track that was flooded by pouring rain. However, he was later handed a 30-second penalty for a collision with Aleksey Dudukalo while they were fighting for the lead. This promoted the Lukoil Racing driver as the winner and dropped Bragin to seventh.
Lev Tolkachev and Nikolay Karamyshev shared the front row on the top-six reverse grid; Bragin sat on the 11th spot because of a five-position grid penalty for dangerous behaviour in the first race that he had won yesterday.
After two laps behind the safety car, Tolkachev led from Karamyshev, Dudukalo and Roman Golikov. However during the first lap Tolkachev made a mistake and dropped to fourth. Dudukalo inherited the lead and pulled away from Karamyshev, while Golikov and Bragin were involved in a tough fight for third.
The safety car was prompted on lap 5 because on an incident in the Super Production class; at the restart, on lap 7, Bragin missed the braking point in the attempt of overtaking Karamyshev and dropped from third to 12th. He recovered to fourth when the safety car was called once again on lap 10, after a Super Production car stopped on the track.
The race resumed on lap 13 and Golikov was given a drive-through for an infringement at the restart. Bragin moved up to second and reduced the gap from Dudukalo. On the last-but-one lap Bragin tried to dive inside the leader, but lost his car that clashed side-to-side with Dudukalo’s. Bragin benefited from the contact and took the lead, crossing the line first ahead of Dudukalo, Karamyshev, Yashin and Tolkachev, but the following investigation resulted in a 30-second time penalty for him.
The SMP RCRS will resume on July 2 and 3 in Sochi, sharing the bill with the TCR International Series.