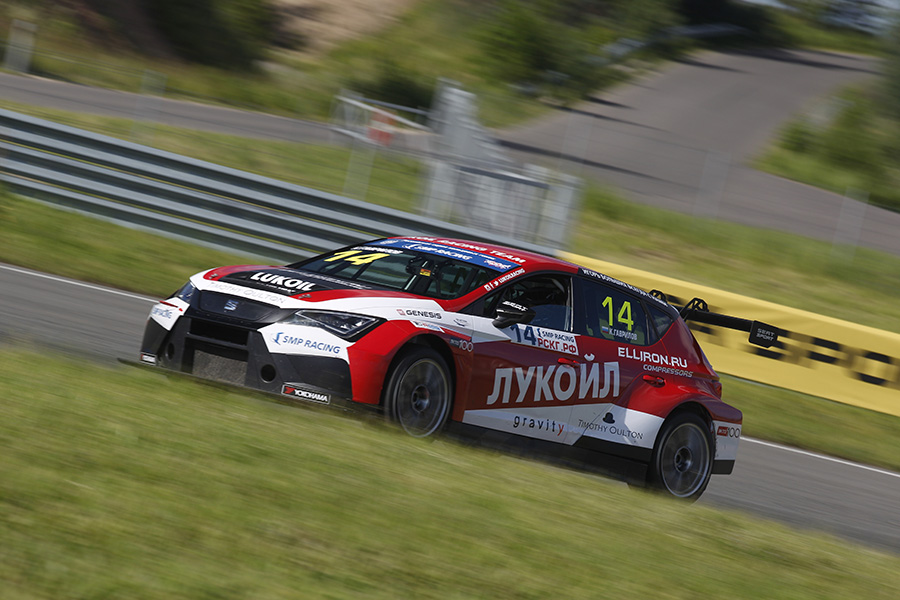 Lukoil Racing’s Klim Gavrilov grabbed his maiden victory in TCR Russia at the end of an eventful race at the Smolenskring.
Reigning champion and current points leader Dmitry Bragin (TAIF Motorsport) finished again on the podium and stretched his margin in the standings to 29 points ahead of Vladimir Sheshenin (LADA Sport Rofnet), while Aleksey Dudukalo (Lukoil Racing) slipped down to third, 38 points behind the leader.
At the start, Irek Minnakhmetov sprinted from pole position and kept Gavrilov and Vitaliy Dudin at bay. Behind the leading trio, Bragin, Dudukalo and Nikolay Karamyshev had a tough fight for third. During the first lap Marat Sharapov and Pavel Yashin made contact and the latter crashed, promoting the safety car on the track.
When the race resumed, Bragin overtook Dudin for third, they made contact and Dudin dropped down, while Dudukalo, Sheshenin and Karamyshev moved up to fourth, fifth and sixth. On lap 6, Sheshenin overtook Dudukalo for fourth, but on the following lap the LADA driver was hit by Dudin and spun off.
On lap 8, Minnakhmetov made a mistake and handed the leadership to Gavrilov. Positions froze for a few laps, then Dudukalo, Karamyshev and Kirill Ladygin began fighting for the fourth position; on lap 14, Ladygin and Dudukalo clashed and the latter dropped down and eventually retired with a broken front suspension. On lap 15, Ladygin went wide and Karamyshev overtook him for fourth.
With two laps to go, Bragin managed to overtake Minnakhmetov and finished second behind Gavrilov.
The championship will resume in two weeks at the Moscow Raceway.