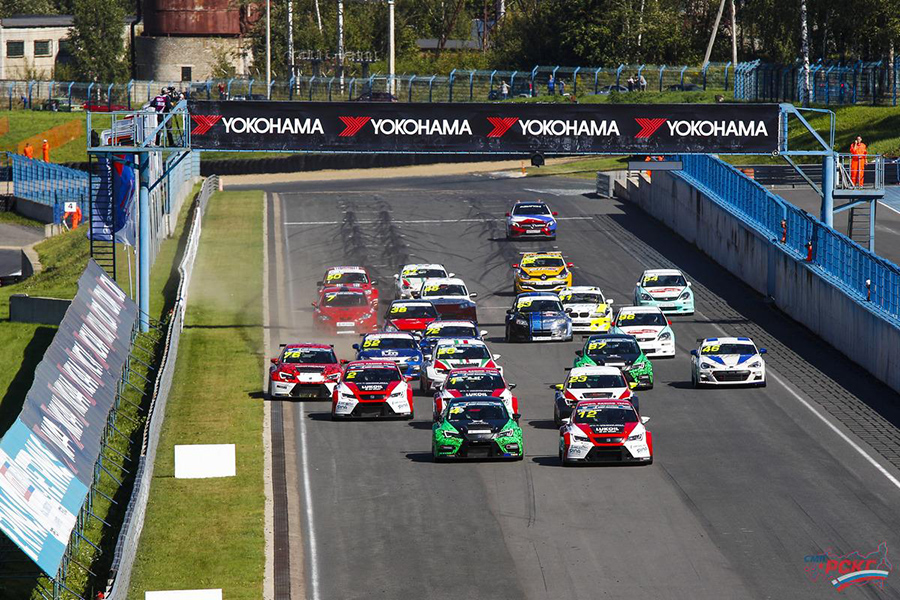 For the second time this year the SMP Russian Circuit Racing Series visited Smolensk; Nikolay Karamyshev (Lukoil Racing Team) and Dmitry Bragin (TAIF Motorsport) won one race apiece, but the latter capitalized on the results of the event to retain the championship lead ahead of Karamyshev’s teammate and reigning champion Aleksey Dudukalo.
With only two races left, at Kazan on 17 and 18 September, Bragin has a leading margin of 38 points, although anything may still happens, as 206 points are still at stake.
Race 1: Bragin sprinted from the pole and took the lead from Karamyshev, Dudukalo and Yashin; during the first lap Yashin and Tolkachev made contact and re-joined at the back of the field.
For the first five laps, Bragin was closely chased by Karamyshev and Dudukalo, while Golikov managed to overtake Minnakhmetov for fourth. Then Dudukalo lost contact from the leading pair of Bragin and Karamyshev and found himself under pressure from Golikov.
On lap 9 Karamyshev stole the lead from Bragin and pulled away, while on the following lap Golikov overtook Dudukalo for third. Bragin and Dudukalo continued to lose ground and in the final stages they both lost another position: Bragin fell to third behind Golikov, while Minnakhmetov overtook Dudukalo for fourth.
Race 2: Tolkachev and Yashin started from the front row of the reverse grid, but during the first lap Bragin managed to overtake them and took the lead.
On lap 2, Dudukalo moved up to second and began chasing the leader; behind him Minnakhmentov was successful in keeping Karamyshev at bay.
For several laps Bragin managed to defend his first position from his pursuers, then on lap 11 Minnakhmentov tried to dive inside Dudukalo. They clashed and Minnakhmentov lost the third position to Karamyshev. From then onwards, Minnakhmentov continued dropping down and finished a distant seventh.
On the last-but-one lap, Karamyshev crashed and Golikov inherited the third position behind Bragin and Dudukalo.