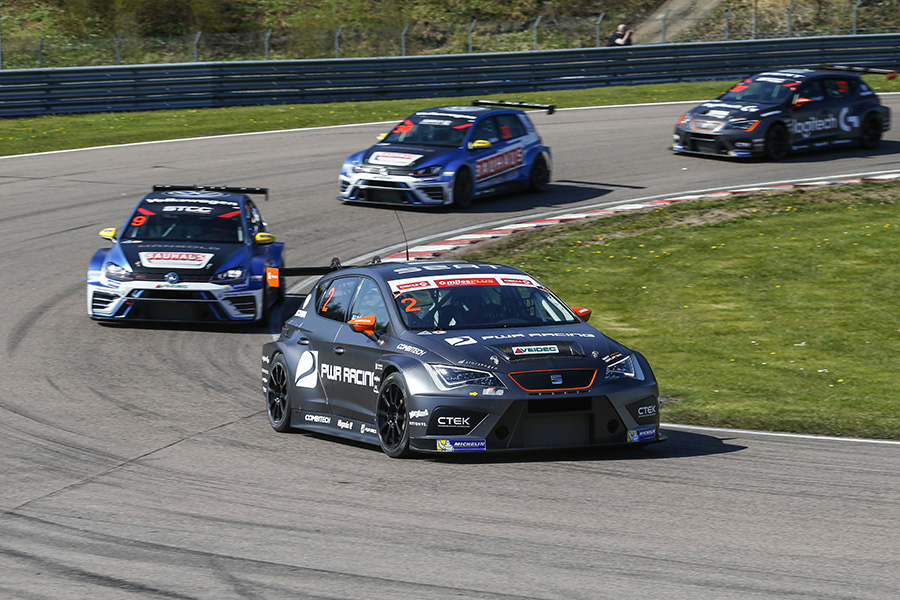 Robert Dahlgren emerged as the guy to beat in the inaugural events of the STCC TCR Scandinavia series at Knutstorp.
The PWR Racing driver and his SEAT León won the first two races and finished second in the third behind Fredrik Ekblom’s Kristoffersson Motorsport Volkswagen Golf GTI.
“It feels great to leave Knutstorp as the points leader. The team gave me a really good car to work with and together with some great luck we pulled it off!”Dahlgren said.

In the first race, Dahlgren benefitted from Ekblom’s poor start and took the lead from the Kristoffersson Motorsport duo of Fredrik Blomstedt and Ekblom. On lap six, Ekblom managed to overtake his teammate and closed the gap, but could not find a way to pass Dahlgren. On the last lap, Blomstedt lost third to Dahlgren’s teammate Daniel Haglöf.
Dahlgren sprinted from pole position in Race 2; at the back of the grid the Audi RS3 LMS of Mikaela Åhlin-Kottulinsky stalled and was hit by Andreas Ahlberg’s Volkswagen and Marcus Annervi’s Honda Civic. The safety car was deployed and when the race restarted on lap 5, Ekblom moved up to second overtaking Tobias Brink (Brink Motorsport Audi). Just like in the first race, Ekblom was chasing Dahlgren, but his hopes were frustrated by another incident between Andreas Andersson’s SEAT and Reuben Kressner’s Audi. The safety car was deployed again and circulated until the end of the race.
The start of the third race was marred by yet another incident between Dennis Strandberg’s Volkswagen, Niklas Lilja’s Honda and Nicklas Oscarsson’s KIA cee’d, which prompted the safety car back in action. When the race resumed, Ekblom maintained the lead for the whole distance, followed by Dahlgren, while Brink, Haglöf and Blomstedt delivered a good fight for the third place.
The results of the day left Dahlgren leading the standings with 69 points, followed by Ekblom at 63; Haglöf lies third with a gap of 30 points from the leader.

The next event of the STCC Scandinavia will take place at Alastaro, Finland, on May 20.