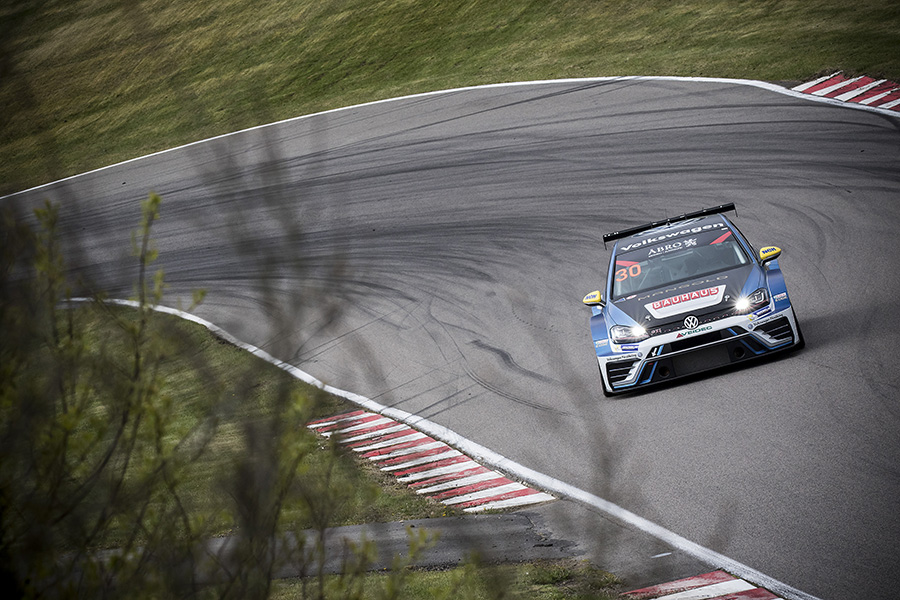 A soaked Ring Knutstorp was the scenery for the first qualifying session of the year for STCC TCR Scandinavia. The 19-car field began the session in tricky conditions and the experienced drivers proved their point from the word go.
Fredrik Ekblom, the former STCC-champion, was the fastest in Q1 with a lap of 1:08.188 at the wheel of his Volkswagen Golf. Ekblom won pole position for Race 1, while his Kristoffersson Motorsport rookie teammate Fredrik Blomstedt posted the second fastest lap, ahead of Robert Dahlgren in a PWR Racing SEAT León.
The ten fastest drivers in Q1 were admitted to Q2. This time it was Dahlgren who claimed pole position for Race 2 with a lap of 1:07.877. Tobias Brink placed his Audi RS3 LMS in second position, while Ekblom qualified third.
Q3 was reserved for the five fastest drivers in Q2 and awarded the first five positions on the grid for Race 3. Just like in Q1, Ekblom (1:09.034) set the fastest lap securing his second pole of the day, while PWR Racing teammates Dahlgren and Daniel Haglöf qualified second and third.
“I’m so happy for the whole team. Most of our guys are new to STCC and their effort really pushed me to claim two pole positions,”said Ekblom.
Despite three brilliant positions in qualifying, Dahlgren hoped for a bit more: “It was alright, but nothing more than that. At least we are up there in the top five and we have the possibility for some good results tomorrow.”
The first of the three sprint races will start at 11:00 tomorrow morning.