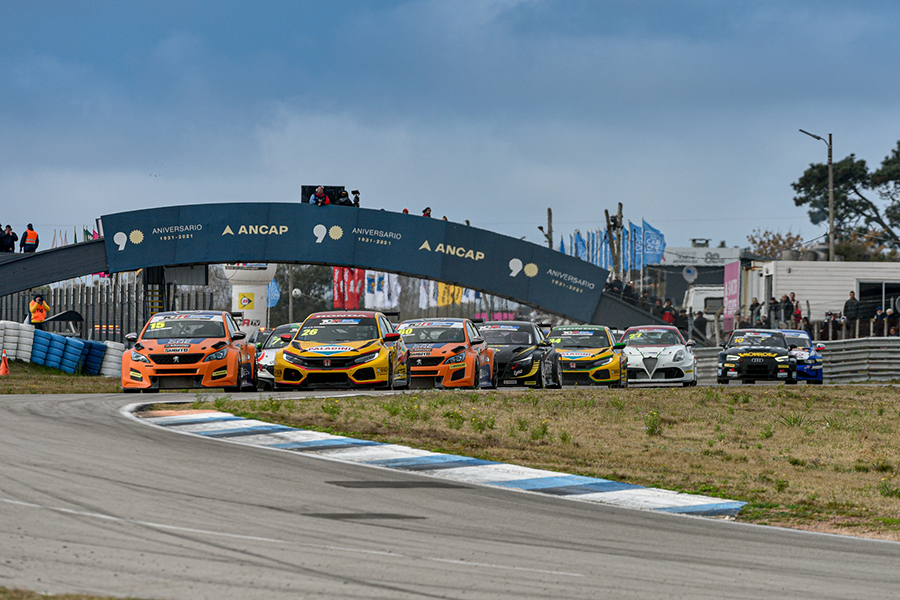 Argentine drivers Juan Àngel Rosso and José Manuel Sapag were victorious in the TCR South America races at El Pinar’s Autódromo Victor Borrat Fabini, while Enrique Maglione gave the Uruguayan fans a reason to cheer for, as he took his first podium result in the championship.

In the battle for the title, Fabricio Pezzini has retained the lead with a margin of 27 points over Raphael Reis, while Rosso is a further three points adrift. Sapag too is still in contention, lying in fourth position with a gap of 59 points from the leader.

Race 1 – Rosso got away well from the pole, but Maglione sprinted from P5 on the grid to lead into turn 1; the Uruguayan went wide, and Rosso moved ahead, while Pedro Aizza was on the tail of Maglione’s car. Behind them, Juan Manuel Casella and Franco Farina defended the fourth and fifth positions from Reis and Rodrigo Aramendia. Reis and Sapag overtook Farina who lost another place to Pezzini who had started 13th following a penalty. Rosso built a lead of several seconds ahead of the pair of Maglione and Aizza. In lap 8, Reis and Sapag passed Casella and moved into fourth and fifth; they advanced further as they passed Aizza in lap 11 just before the Hyundai driver retired. Four laps later, Pezzini overtook Casella for fifth. Reis and Sapag put the pressure on the second-placed Maglione and during the fight Sapag seized the opportunity to pass Reis for P3 in lap 18. There were no other changes and Rosso took his third consecutive win ahead of Maglione and Sapag.

Race 2 – Fabio Casagrande started from pole, but he was hit by Aizza and went wide at turn 1. Sapag took the lead from Aizza and Maglione who sent Aramendia into a spin, while his teammate Fernando Rama spun as well in avoidance. The safety car was deployed for towing Aramendia’s Alfa Romeo off the gravel and Rosso bumped into the back of Farina’s cars who spun and rejoined. When the green flag was waved, Sapag pulled away, while Aizza rejected an attack from Maglione. Behind the top three, Farina was chased by Reis, Rosso and Alceu Feldman. In lap 7, Feldman passed Rosso for P6, and the latter lost P7 to Pezzini in lap 10. Reis attempted a move to pass Farina but lost one place to Feldman instead. In lap 16, Feldman muscled his way past Farina and Reis overtook them both for P4. During the final laps, Reis attacked Maglione and eventually passed him in lap 23, moving into third; Pezzini overtook Feldman to finish fifth while his teammate Sapag claimed his first victory of the season. The penalties imposed after the race dropped Reis (15 seconds for jump start), Maglione (20 seconds for collisions with Aramendia and Feldman) and Rosso (20 seconds for not slowing when the safety car board was shown) to 7th, 8th and 10th, while Pezzini advanced to P3.

TCR South America will next move to Argentina for the endurance race in Termas de Río Hondo on August 26/28.