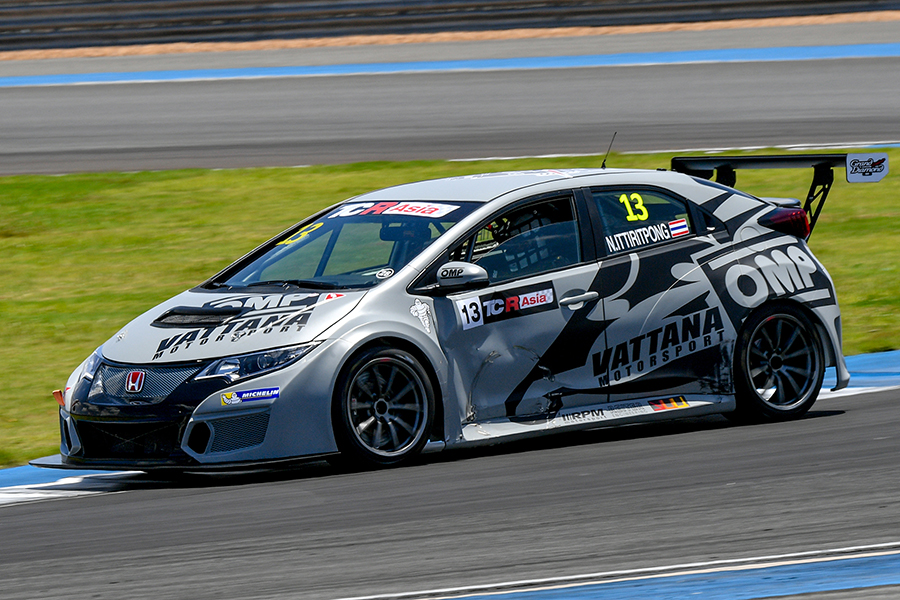 Narasak Ittiritpong celebrated his first appearance in TCR Thailand with pole position and victory in Race 1, on the occasion of the series’ second event at Buriram’s Chang International Circuit.
Ittiritpong was forced to miss the opening race meeting (21/22 May also at Buriram) due to a delay in the delivery of his Honda Civic TCR to Vattana Motorsport. He was eventually able to take part in the TCR Asia event at Buriram on 9/10 June in which he claimed third place in Race 1.
Yesterday Ittiritpong set pole position with a lap of 1:45.750, beating his teammate Jack Lemvard (SEAT León – 1:46.227) and Krating Daeng Racing Team’sGerman newcomer Alexander Mies (SEAT León – 1:46.531). In today’s race, Ittiritpong took advantage of the pole and led for the whole 12-lap distance, keeping Mies at bay in the first two laps and then creating a gap.
Mies was later joined by Lemvard and Carlo Van Dam (Singha Motorsport Team Thailand  SEAT León), the winner of the Thai series’ first two rounds in May; the three of them had a close fight for the other podium positions that eventually saw Van Dam and Mies crossing the line in second and third respectively.
The second race will take place tomorrow at 14:25 local time (09:25 in Central Europe).