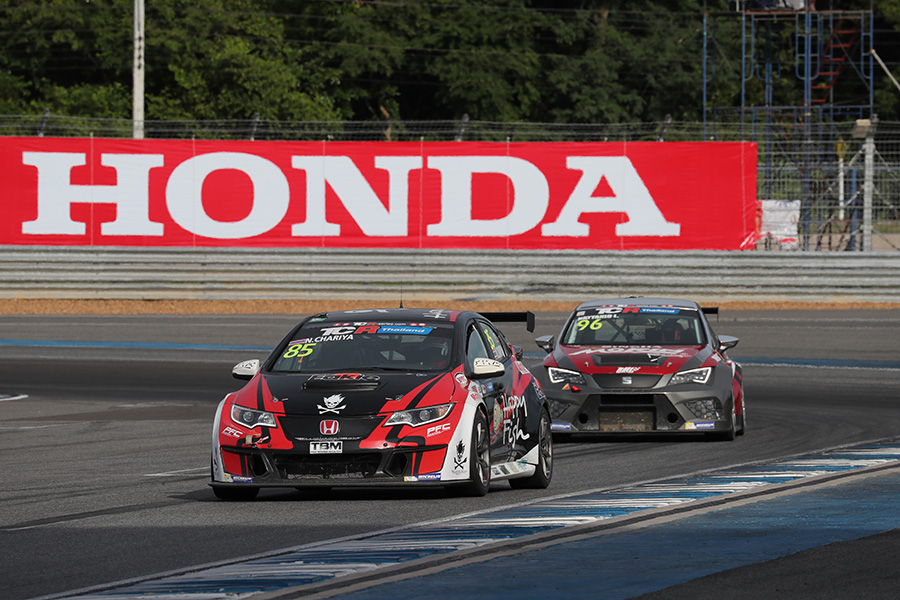 For the second consecutive year, TCR Thailand’s competitors raced together the International Series at Buriram’s Chang International Circuit.
Chariya Nuya scored a double victory in the Billionaire Boys Racing Honda Civic, which helped him to take the lead in the series’ Pro Am class, 11 points ahead of Morin Racing’s Nattanid Lewattaravanagul. The lady driver proved to be fast and tough enough to make Nuya’s life hard in both races, finishing twice a very close second.
Despite he was forced to retire in Race 1 Pasarit Promsombat (RMI Racing SEAT León) clinched the title in the Am class with one event still to go.
In Race 1, Promsombat took the lead from Nuya on lap 3, however with only three laps to go he hit a pile of tyre and retired. Nuya inherited the lead and crossed the finishing line first, only three seconds ahead of Leewattanavaragul. Rattanin Leenutaphong completed the podium at the wheel of his Yotrakit Racing Team SEAT León.
Nuya led the whole second race, but he had to fight hard for defending his lead from the attacks of Lewattanavaragul who was chasing him at a striking distance. Behind them, Nattachak Hanjitkasen (TBN MK Ihere Racing Honda) overtook Leenutaphong for third on lap 6; on lap 11 Leenutaphong lost also fourth position to Promsombat.
The fight for third was white-hot and eventually Promsombat managed to win it on the last lap from Leenutaphong and Hanjitkasen.
The championship will return to Buriram for its final race meeting on September 23 and 24.