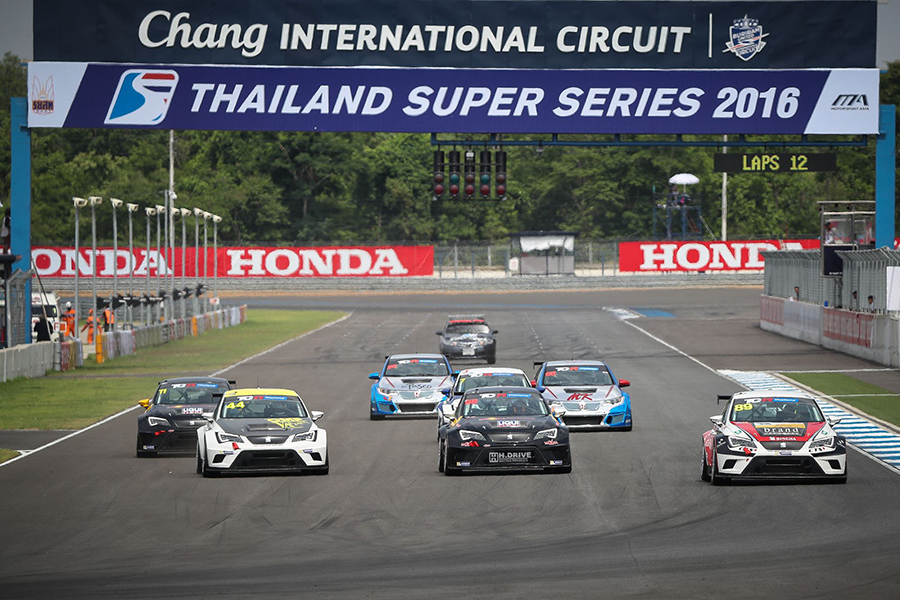 Carlo Van Dam completed a perfect hat-trick at Buriram’s Chang International Circuit in TCR Thailand’s inaugural event. After setting pole position and winning the first race on Saturday, the Dutch driver encored of Sunday with victory in Race 2.
At the start it was the two Krating Daeng drivers that seized the early advantage with Grant Supaphong first and Chen Jian Hong second, while Nattachak Hanjitkasem’s Honda Civic was third.
Van Dam elbowed his way down the inside of Jack Lemvard to snatch fourth place and then the Singha Motorsport SEAT dived past Hanjitkasem and Chen, moving up to second. A few moments later Van Dam took the lead from Supaphong at Turn 3.
In the meantime Lemvard was also moving up to third. Him, Van Dam and Supaphong challenged each other in a close fight for the lead, running abreast for the whole first lap.
Van Dam pulled away with Lemvard on his tail; behind them Chen overtook Supaphong for third.
Lap by lap the leading pair was able to stretch the gap, while Chen and Supaphong continued their battle for the third position until the latter made a mistake and dropped in sixth, squeezed between Wijak Lertprasertpakorn and Paritat Bulbon.
For the whole race Lemvard chased Van Dam at a striking distance, but the Dutchman never offered him the opportunity to attempt an overtaking move and claimed his second victory of the weekend. Chen came home in third place ahead of Hanjitkasem.
The second race meeting of the TCT Thailand will take place again at Buriram on June 11 and 12.