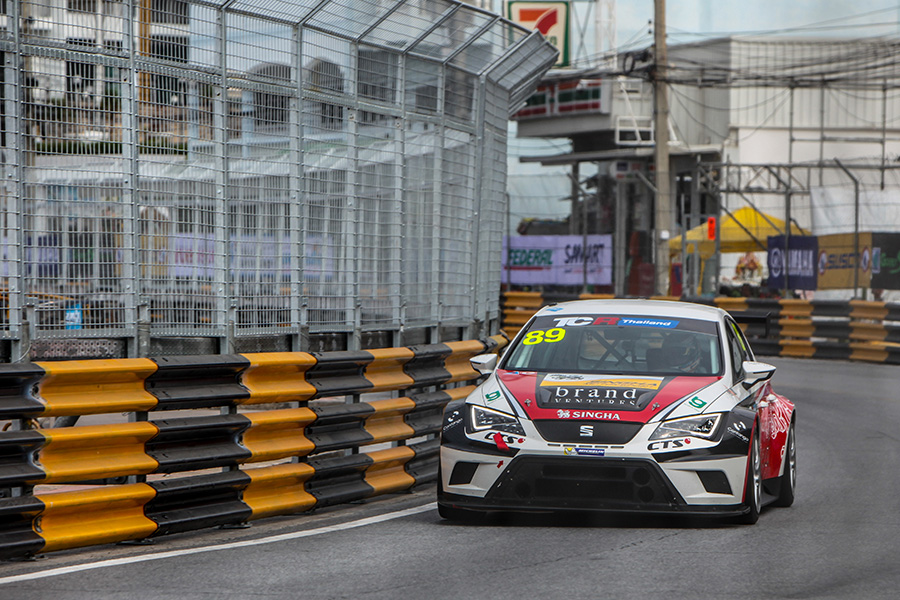 Kantadhee Kusiri encored yesterday’s success in Race 1 and won the final round of the 2016 TCR Thailand at Bangsaen’s street circuit, while Singha Motorsport Team Thailand’s Carlo van Dam was crowned the series’ first ever champion.
Van Dam and Jack Lemvard of Vattana Motorsport were on equal points before the last race. Lemvard took a brilliant start, his SEAT León squeezed between the Kratingdaeng Racing Team SEAT cars of Chen Jian Hong and Grant Supaphong that were sharing the front row on the top-five reverse grid and took the lead. He managed to create a small gap, while van Dam and his SEAT were involved in a close fight with Kusiri’s Billionaire Boy Racing Honda Civic.
On lap 5 Kusiri overtook van Dam for second and quickly closed the gap from Lemvard, passing him on lap 6.
In the second part of the race Kusiri maintained a comfortable lead on his way to another victory, while Lemvard successfully defended his second position. However, as Lemvard had to drop two results, the third place was enough for van Dam to secure the title with a seven-point margin. Narasak Ittiritpong (Vattana Motorsport Honda Civic) charged to fourth after starting from the back of the grid due to a technical failure in Race 1.
In the AM class Chen was able to keep Nattachak Hanjitkasen (TBN MK Ihere Racing Honda Civic) at bay for the whole race, claiming victory by a slim margin of seven hundredths of a second and the title as well.