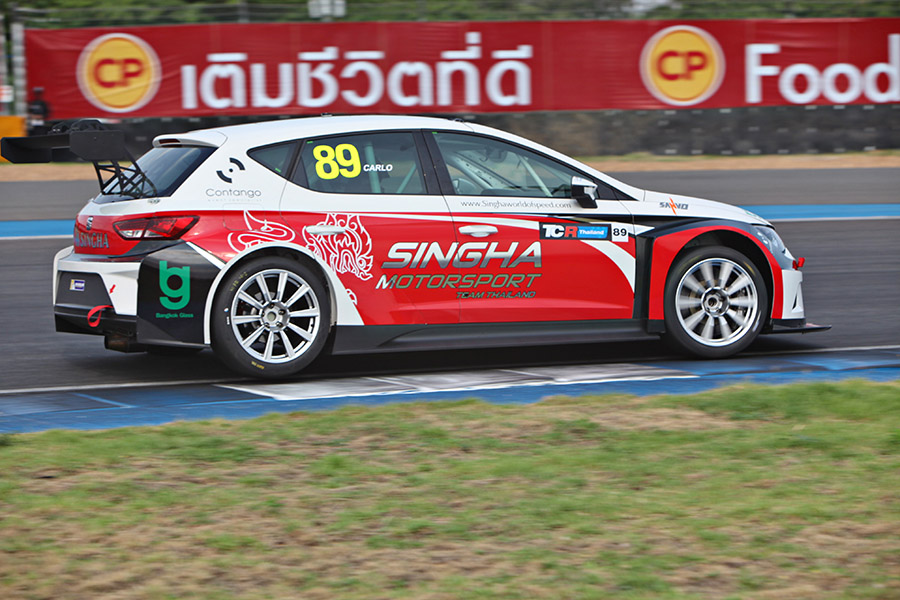 TCR Thailand’s first ever race took place at Buriram’s Chang International Circuit in a sunny and hot afternoon, with Carlo Van Dam sitting on pole and Jack Lemvard alongside him. There was a little bit of Thai motorsport history in the offing as the first driver past the chequered flag would go down in the record books as the first one to ever to win a TCR Thailand race.
At the green lights Van Dam converted his pole position into the race lead with Chen Jian Hong getting a quick getaway from Row 2 and Grant Supaphong following him.
The first big loser was Lemvard as he ran off the track and lost four places. As the pack raced through Turn 2, Paritat Bulbon pulled off; he had also suffered from contact at Turn 1, which had damaged his driveshaft, and his race was abruptly over.
Lemvard picked off some places and made his way up to P3 and then he tried to catch up with Chen, but he wasn’t able to make much more progress as the Taiwanese driver carefully managed his cushion as the race headed into the closing stages.
Van Dam kept stretching out his advantage and by the time the race entered the final couple of laps the Dutchman had edged out a commanding 10-second lead.
Thus at the end of 12 laps Van Dam cruised across the finish line well ahead of Chen and Lemvard who wrapped up the podium.

“I’m very proud to be the first winner of a round of TCR Thailand,” said Van Dam. “I enjoyed a lot driving this car coming from a GT3, which is a rear wheel drive car, but this is actually better than I was expecting, it has a lot of power and good downforce. Tomorrow with the reverse grid we will have to see, it’s going to be a bit more challenging.”