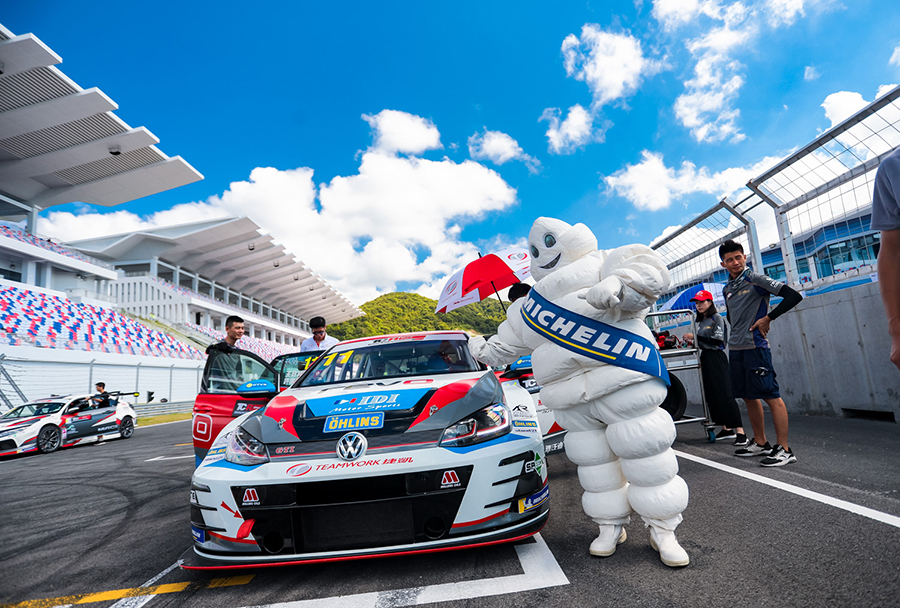 The TeamWork Motorsport Volkswagen Golf GTI of Sunny Wong and Alex Hui won the TCR China’s Race 3 at Ningbo Speedpark. The 60-minute race was red-flagged after 30 minutes because of a downpour and did not resume.
At the start André Couto sprinted from third on the grid and pipped the two Volkswagen Golf cars sitting on the front row: Tian Li Ying’s and Zhu Zhen Yu’s. Behind Couto, Zhu retained the second place, while Li Lin and Sunny Wong overtook Tang You Xi for third and fourth. On lap 5, as a light rain began to fall, Wong passed Li Lin for third and closed the gap from Zhu.
The rain intensified and some drivers – Couto, Li Lin, Tian – pitted for wet tyres, which promoted Zhu and Wong to first and second as they were trying to stay on the track with slick tyres until the pit-stop window opened.
However, as the rain turned into a flood, Zhu crashed heavily at the end of the pit straight, Wong spun and rejoined, Li Lin ended up into the gravel and the safety car was deployed. After a few minutes, the red flag was waved and the teams used the suspension for making the mandatory pit stop, but after twenty minutes the clerk of the course decided for not restarting the race.
TeamWork Motorsport was declared the winner ahead of the MacPro Racing’s Honda Civic of Kong Kin Chong-Tang You Xi and the CUS Racing VW Golf of Zhu Zhen Yu and Zhou Bi Huang. Only half points were awarded.
TCR China will return to Ningbo for rounds 7, 8 and 9 on September 29/30.