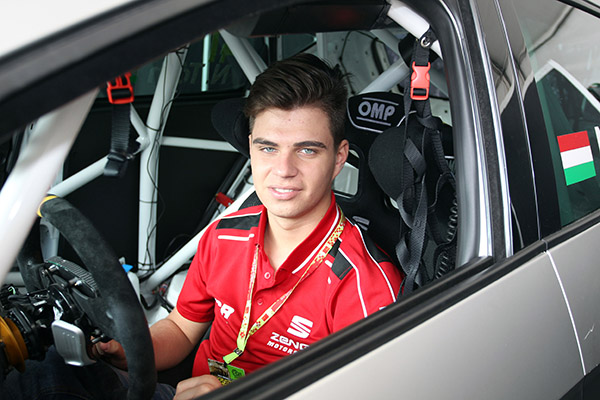 Teenager Norbert Tóth: a triathlete in the TCR

One could think that to be a touring car driver in Hungary, you have to call yourself … Norbert! After Michelisz, Kiss and Nagy, Tóth is the latest Norbert to join the élite of touring car racing under the banner of Zengő Motorsport.
Also the youngest, as he is merely 16 years old. Tóth is joining the TCR at Shanghai and will carry on the entire season with the SEAT León Racer of the Hungarian squad.

“It’s a dream to be driving in an international series of such level”, reckons the Magyar, “Only a few years ago, in 2011, I still was a little kid that had the opportunity to get into the Zengő pit at the Hungaroring and chat with my hero Michelisz.”

At that time, little Norbert had started his karting career, which brought him to live some years in Italy and become perfectly fluent in Italian. He won the 2013 Easykart 100 World Pre-final in 2013 to jump immediately after into the Ferrari Challenge Europe, thus driving an F458 … at 14! Last season, he contested the SEAT León Eurocup, and he is now set for a promising debut in the TCR International Series. Still combining high school with racing, the Miskolc-born but resident in Hatvan, in the outskirts of Budapest, is a complete sportsman, as he enjoys running, biking and swimming.

“I used to do triathlon and duathlon quite seriously some years ago, coming also 5thin Hungary’s national duathlon championship”, he explained. “Nowadays, I am more focused on racing, but still like to challenge myself in triathlons from time to time.”