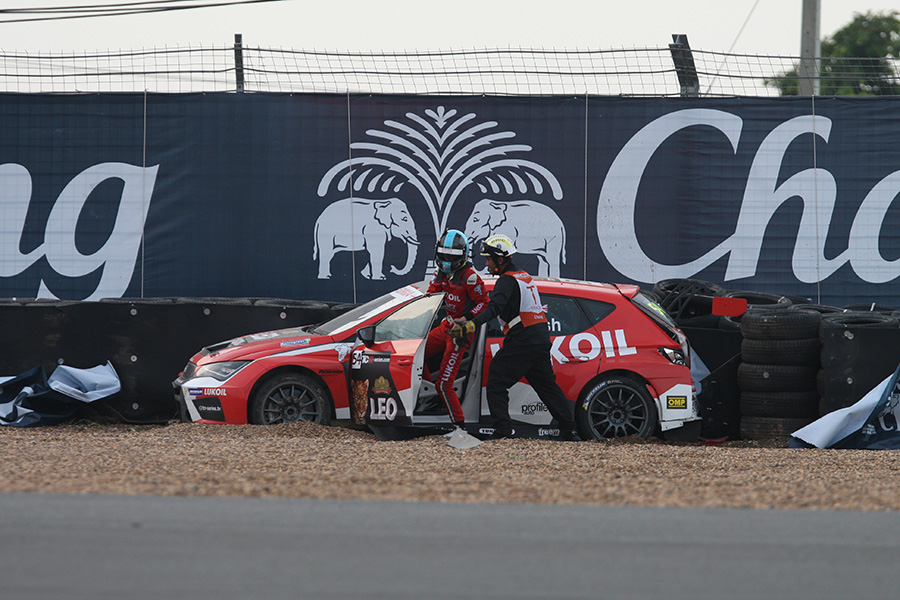 Test day - Nash sets the fastest lap and then crashes

Today TCR competitors had the opportunity of testing at Chang International Circuit during four 60-minute sessions. 23 drivers out of the 24 entered for the event took part; the only exception was Pepe Oriola who is still suffering from a foot injury occurred during fitness training.
James Nash of Craft-Bamboo Lukoil set the fastest lap of the day (1:43.921) in the third session and then crashed heavily at Turn 3 a few minutes before the end of the fourth session that was red-flagged for good.
The Briton escaped unscathed but shocked: “It had been an excellent day until the crash. I was in my first flying lap an when I hit the brakes at Turn3, something happened. The car couldn’t brake nor turn. I went off at very high speed and could only put the car sideways in the gravel not to hit the barriers head on. It was a very big shunt, one of the worst in my career, but luckily, I am OK. We will see if the car is reparable and most importantly, we’ll have to analyse all the data and try to understand what happened.”
After topping the first two sessions, Gianni Morbidelli set the fastest lap again in the fourth one; his lap of 1:44.019 was the second fastest of the day. However, the Italian driver was not completely satisfied: “It was a good session from a results point of view, but beyond those, I am not very happy with the drivability of the car. We still need to work a lot on the set-up."
The Leopard Racing duo of Jean-Karl Vernay (1:44.038) and Stefano Comini (1:44.250) ranked in third and fourth positions, while Mat’o Homola of B3 Racing Team was fifth fastest (1:44.302). Comini said: “I am reasonably happy, we had a good working day and I also had some fun… The car feels good, I think we are working in the right direction on the set-up, the gap is really the result of the success ballast we carry.”
The best TCR Thailand drivers were Vattana Motorsport teammates Narasak Ittiritpong (1:45.231) and Jack Lemvard (1:44.237) in 11th and 12th. “I am happy with what we achieved today, it was a good testing day, especially taking into consideration that I was on very old tyres and that we are running a 2015 version of the SEAT León. With fresh tyres, I think we can be among the frontrunners,” Lemvard commented.
The Top Run Subaru of Luigi Ferrara took only part in the first session, as the team was later working to solve gearbox problems.
The event will officially go underway tomorrow morning with the first of two Free Practice sessions at 11:00 local time.