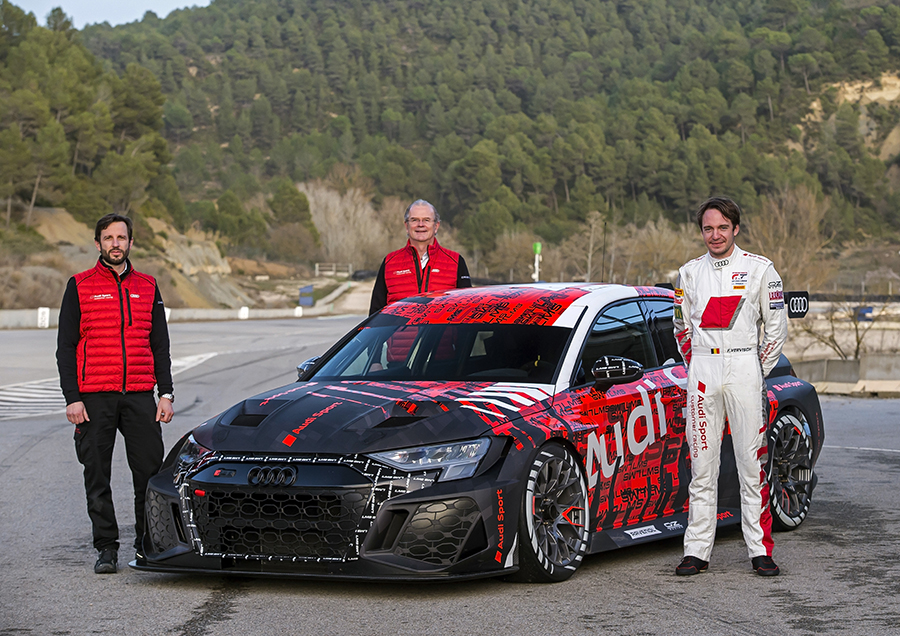 The Audi RS 3 LMS was named the 2021 TCR Model of the Year for the second time in four years. The touring car from Ingolstadt had already won this honorary accolade in 2018, after the SEAT León in 2017 and before the Honda Civic Type R in 2019 and 2020.
The Model of the Year is awarded by WSC based on a classification that takes into account the results achieved by all the TCR-certified model cars in all the TCR-sanctioned races held during the season.
During another season that was affected by the COVID-19 pandemic, a total of 304 races awarded points for the Model of the Year classification. Audi cars have scored 7242 points in 23 TCR-sanctioned series; their most outstanding results were three race wins in the WTCR with the brand new RS 3 LMS model launched at the beginning of the season – the first one of them conquered at Aragón MotorLand by Frédéric Vervisch, the driver who had completed most of the developing tests – and the TCR Australia title clinched by Chaz Mostert at the wheel of the previous RS 3 LMS model run by the Melbourne Performance Centre.
The Honda Civic and the CUPRA León were classified second and third in the final classification, while a total of 15 different models scored points for the Model of the Year classification.

WSC President Marcello Lotti commented: “This Model of the Year award for the Audi RS 3 LMS is testament to Audi Sport Customer Team’s dedication and support to the TCR category. At the beginning of 2021 they launched the second generation of their RS 3 LMS TCR while the previous model was still very competitive, and the results achieved during the past season with both models granted them the TCR accolade for the second time in four years.”

Andrea Milocco, Project Manager Audi RS 3 LMS, said: “It’s great to see the Audi RS 3 LMS winning the TCR Model of the Year Award for the second time after 2018. With homologated TCR cars of 14 brands worldwide there was again a tough competition going on around the globe from club racing, national and regional series up to the WTCR – FIA World Touring Car Cup. Thus, the RS 3 LMS has won the coveted award already twice in its life cycle. This makes us proud and is at the same time a challenge for the RS 3 LMS gen II. Our tribute goes as well to all our customers for having achieved so many wins and podium finishes. Thanks for their strong commitment, their skills and their sporting attitude.”