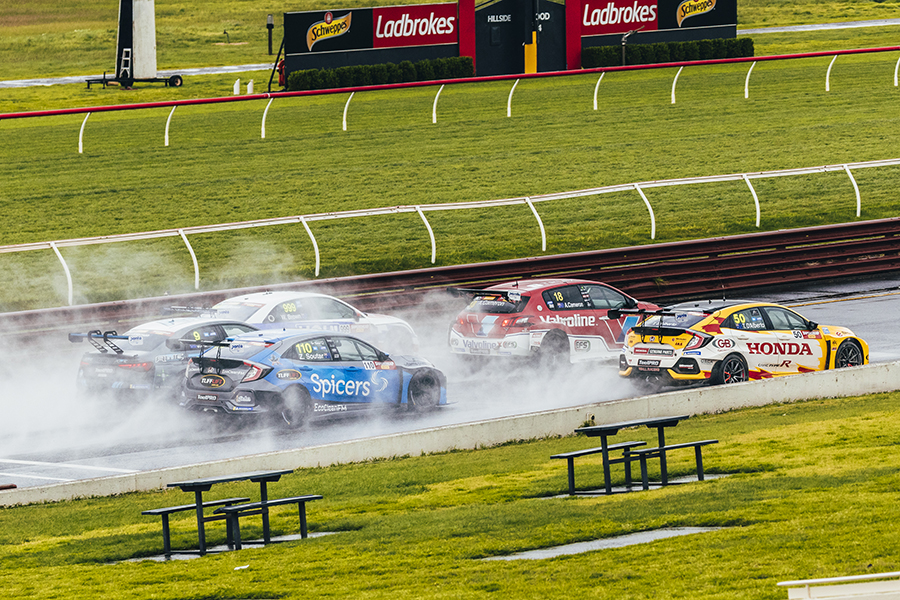 The battle for TCR Australia title goes down to the wire

In the battle for the title, Tony D’Alberto retained the leadership in the standings, 56 points clear of Jordan Cox. With 212 points on offer in the season finale at Bathurst on November 11/13, several other drivers are still in contention, including Brown who is placed third with a gap of 73 points and the pair of Zac Soutar and Josh Buchan who are tied, 93 points behind the leader.

Race 1 – Cameron made the best start from P2 on the grid and led from Brown and Jay Hanson who was on pole. Behind them, Soutar kept D’Alberto behind to retain fourth. For most of the race, the two Audi drivers tried to find a gap to pass Cameron who was able to keep them at bay. The safety car was deployed twice, when Dylan O’Keeffe’s Peugeot came to a halt on the back straight and when Michael Clemente’s Honda went off at T1. In between the neutralisations, Hanson passed Brown for second. The green flag was waved for the last lap and Hanson tried to steal the lead from Cameron; they entered T5 abreast, and Hanson spun off. Cameron took his third victory of the season from Brown, Soutar and D’Alberto.

Race 2 – Ben Bargwanna topped the grid ahead of James Moffat who made a better start and led from Cox and Michael Caruso; behind them Bailey Sweeny tried to pass Bargwanna and hit Caruso who spun off, while Sweeny went off soon afterwards prompting the safety car into action. At the restart, Moffat defended the lead from Cox, with Bargwanna, D’Alberto, Brown and Cameron chasing the leading duo. In lap 9, Moffat slowed to avoid debris on the tarmac and was passed by Cox and Bargwanna; there was commotion behind, as Moffat and Hansen made contact and were collected by Cameron. The safety car returned into action, as Moffat and Cameron retired; when racing resumed the rain intensified and Cox aquaplaned forcing Bargwanna to go straight in avoidance at the final turn. Bargwanna was first under the chequered flag ahead of Cox, Brown and D’Alberto.

Race 3 – Brown and Soutar shared the front row, with title contenders D’Alberto and Cox right behind. Cox made the best start and led from Soutar, Bargwanna and Brown.

Brown passed both Bargwanna and Soutar and closed the gap from Cox who saw his margin vanishing after a half spin in lap 7. Cox defended the lead, while Caruso climbed to third in lap 12. One lap later, Brown stole the lead from Cox, who lost the second place to Caruso in lap 16. Caruso tried his best to chase Brown who controlled the situation and claimed his first win of the season with a 1.1-second margin. Cox completed the podium ahead of Buchan and D’Alberto.