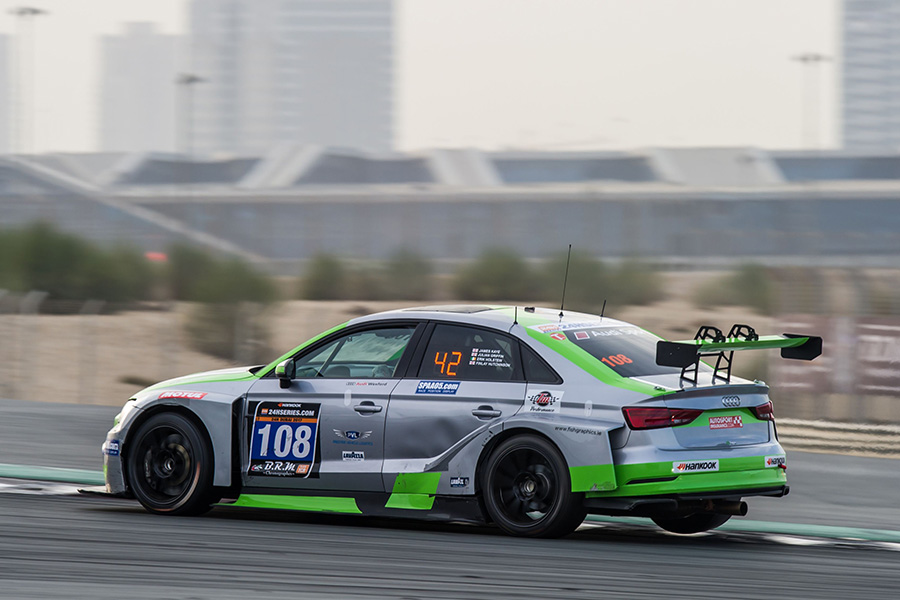 It didn’t take long to the new Audi RS 3 LMS to show its potential. Making its racing debut, the German car run by CadSpeed Racing with A Tech fought for victory on Friday in the opening round of the TCR Middle East Series and claimed its maiden win on Saturday in the TCR class of the 24H Dubai.
James Kaye, Julian Griffin, Erik Holstein and Finlay Hutchison shared driving duties in the long distance race, the first event of the 2017 24H Series. They finished in a respectable 36th position overall (out of the 94 cars that took the start), covering 513 laps at the average speed of 115.09 kph.
The CadSpeed Audi beat the Modena Motorsport SEAT León TCR DSG of Wayne Shen, John Shen, Francis Tjia and Mathias Beche by two laps, while the Zest Racecar Engineering SEAT León TCR DSG (Philippe Ulivieri/Gosia Rdest/John Allen/JT Coupal/John Weisberg) finished in third position with a gap of 30 laps.

Chris Reinke, Head of Audi Sport Customer Racing, attended the Dubai event and waved the green flag at the start of he TCR Middle East’s first race. He later commented: “It was an honour to wave the start flag. The new Audi RS 3 LMS has been developed for customer racing in the quickly growing TCR series and CadSpeed Racing trusted us by fielding the car in both the TCR Middle East Series and the 24H Dubai during the same race meeting. This trust has been rewarded, not only with a solid performance in the TCR Middle East Series, but also with a TCR class win in the 24H Dubai. This success demonstrated the strong development of the vehicle and marked the beginning of what will hopefully be a long and successful career of our new Audi RS 3 LMS.”