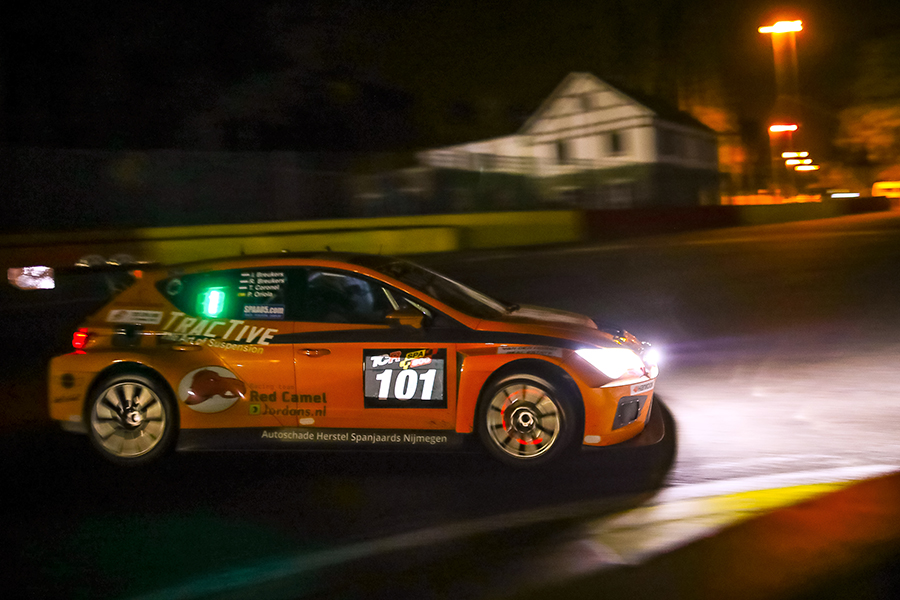 The CUPRA of Red Camel-Jordans.nl wins the TCR Spa 500

The Red Camel-Jordans.nl CUPRA won the inaugural TCR Spa 500 race after leading nearly throughout the 23-hour race distance. The rain that poured in the final seven hours prevented the winners from reaching the 500-lap mark.
Pepe Oriola took the lead in lap 14 and together with his codrivers – Tom Coronel, Rik Breukers and Ivo Breuker – built a comfortable margin that eventually was of six laps over the DG Sport Compétition Peugeot 308 driven by Aurélien Comte, Julien Briché and Teddy Clairet.
Both the leading cars had a smooth race in terms of reliability and made the same number of pit stops. The Peugeot proved slightly faster on the lap – Comte posted the fastest time of 2:34.616 – but fuel consumption made the difference, as the Dutch CUPRA was able to run stints of four or five laps more than the Peugeot in the dry. However, DG Sport Compétition and Peugeot Sport may be pleased, because the 308 TCR proved competitive on its first outing in a long distance race.
The podium was completed by the TOPCAR Sport CUPRA of Julien Apothéloz, Mikel Azcona, Fabian Danz, Antti Buri and Kari-Pekka Laaksonen that finished ten laps behind the leaders and three ahead of the brilliant Viper Niza Racing CUPRA shared by the Malaysian quartet of Douglas Khoo, Dominic Ang, Fariqe Hairuman and Melvin Moh that won the PRO-AM class. Victory in the AM class went to the Peugeot 308 run by Burton Racing for Pierre-Yves Corthals, Caren Burton, Armand Fumal, Olivier Meurens and Philip Stéveny.
The last casualty of the race was the Bas Koeten Racing Audi that Alex Au crashed at Blanchimont with two hours and 30 minutes to go; Peter Falhström’s Lestrup Racing Volkswagen and Andy Yan’s Teamwork Huff Audi collided at at Campus in the last ten minutes and this resulted in another safety car intervention that ended only three minutes before the chequered flag hailed Oriola crossing the line in the winning car.
Eventually eleven of the 17 starters made it to the end; retirements were all due to incidents and only a couple of cars suffered from technical issues: the GDL Australia Audi was forced to replace the turbo charger, while the Holmgaard Motorsport Volkswagen had problems with the engine cooling system.