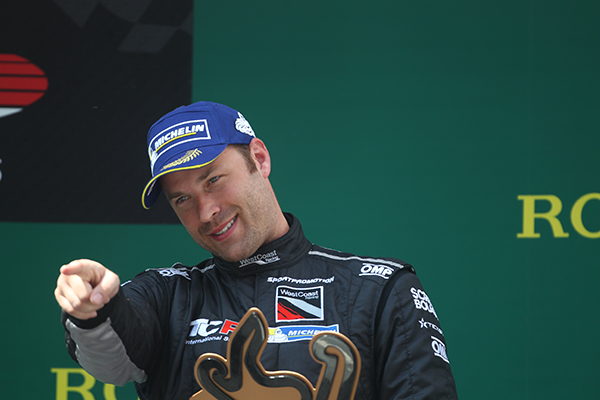 Kevin Gleason can easily be dubbed as the good surprise of the start of the TCR International Series season.
The 27-year-old from Johnstown, Pennsylvania, was virtually unknown on the international touring car scene only a couple a weeks ago and yet he became the first American driver to claim a podium result in the category.

“I am impressed by how quickly this new series is coming together,”admitted Kevin, “The racing is really good and I am enjoying every minute of this new experience”.

Talking about novelties, Gleason is facing quite a number of them: “Except 15 laps at Monza before the season, I haven’t had the possibility to test and all the TCR tracks are new to me, but it is just so exciting to be racing on some of these legendary GP tracks that made me dream when I was a child”.

Kevin has an excellent motorsport culture, having been raised in a family of racing fans. His dad Chris, who made it up to Formula Atlantic and took part twice in the Le Mans 24 Hours, is still racing. The Gleason family owns a  technology business closely linked to motorsports, where also Kevin keeps busy with when he is back home. Kevin’s career started in 2008in the Miata Cup, then he drove touring cars and GTs, making his first international outings last year, in landmark events such as the Nürburgring 24 Hours and Bathurst 12 Hours. “I couldn’t sleep the night before those races”, confessed Kevin.

He shared driving duties there with his friend and touring car star Rob Huff, whose management helped Kevin finding an opening in the TCR: “With no huge backing, it was becoming difficult to progress in my career, so I welcomed very much this opportunity, although totally off the normal path for a US driver.”

West Coast Racing is absolutely delighted with their American kid, whose data show an impeccable driving style and great consistency. Kevin, in return, does not shy away from praising the Swedish squad: “They made me feel at home from day one”. And the package proved competitive also from day one, with Gleason writing history as the first-ever pole-sitter in the TCR, and taking his first podium finish in race 3. It’s only the start of a long affair…