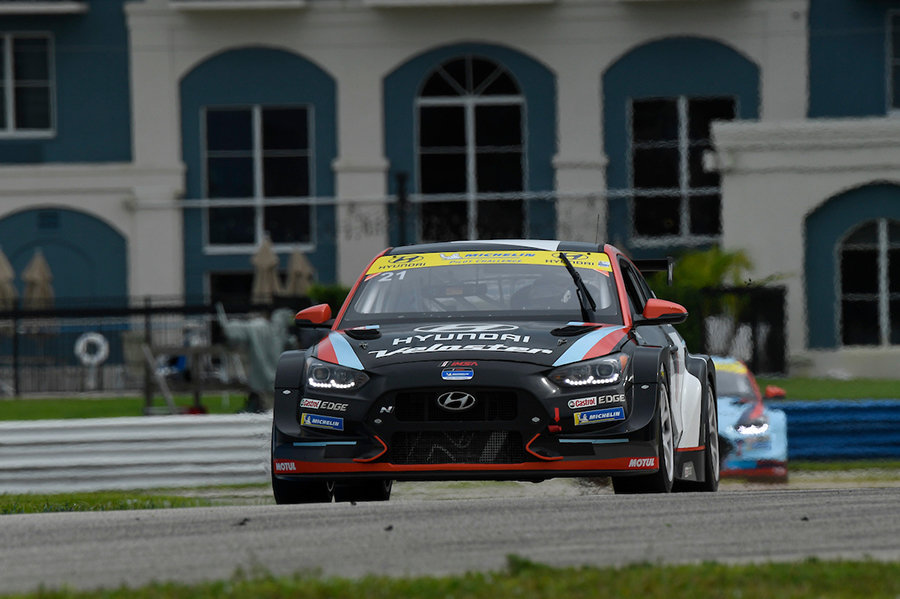 The Hyundai cars fill the TCR podium at Sebring

The second round of the IMSA Michelin Pilot Challenge, at Sebring International Raceway, ended in a complete domination of the Hyundai Veloster N cars.
After posting the five fastest laps in Qualifying, with the Bryan Herta Autosport with Curb-Agajanian car of Gabby Chaves-Ken Norman on pole position, the Korean cars filled the podium at the end of the two-hour race.
Harry Gottsacker and Mark Wilkins teamed to win the TCR class in the #21 Bryan Herta car, beating by three tenths of a second the sister Veloster #98 of Michael Lewis and Mason Filippi. The podium was completed by Alex Papadopulos-Ben Waddel in the Forty7 Motorsports Veloster #47.
Wilkins credited Gottsacker’s quick start with their victory: "Harry did a monster start. He was right up in the GS field in the beginning, which was really cool. That got me inspired. It just felt like clockwork. All of this work we’ve been doing these last few years as a team really carried over."
Behind the Hyundai trio, the Audi RS 3 LMS cars run by FastMD Racing with Speed Syndicate finished in fourth and fifht positions with the #23 of Max Faulkner-James Vance ahead of the #32 of Mikey Taylor-Michael McCarthy; they were followed in sixth position by the TMR Engineering Alfa Romeo Giulietta shared by Roy Block and Tim Lewis.
Wilikins-Gottsacker are now leading the standings, though on equal points with Lewis-Filippi, while Jonathan Morley and Gavin Ernstone, who were the points leader after winning the season opener at Daytona in the Road Shagger Racing Audi RS 3 LMS have slipped to third, two points behind.
The Michelin Pilot Challenge season will resume at Road America on Elkhart Lake, Wisconsin, on July 31-August 2.