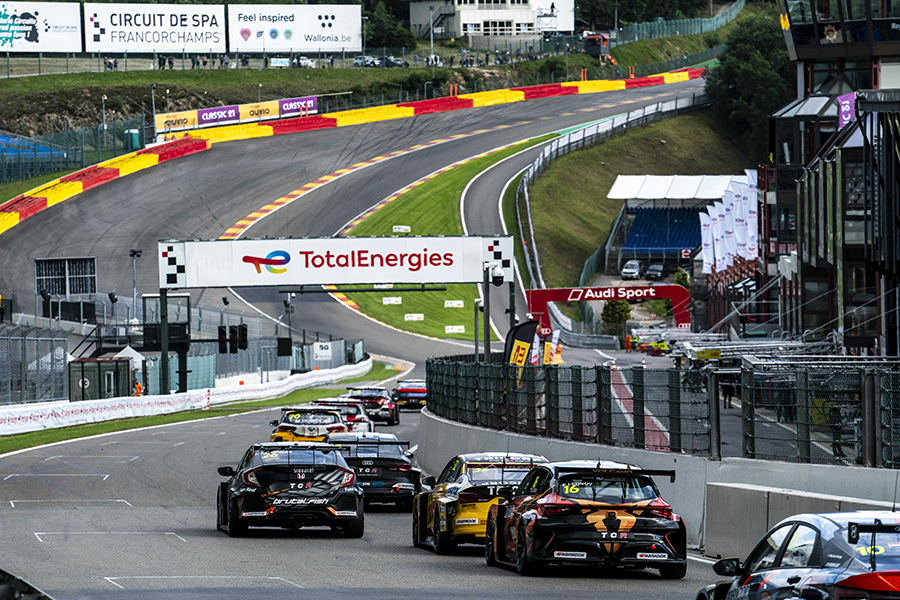 TCR Europe resumes at Spa-Francorchamps, one of Europe’s most iconic circuits that has hosted the series each year since it launched in its current format in 2018.

After Mikel Azcona’s domination of the Belgian event in recent years, the Volcano Motorsport drivers – Isidro Callejas, Klim Gavrilov and Evgenii Leonov – must be confident of their CUPRA Leon Competición cars potential.

The strongest team line-up is that of Belgium-based Comtoyou Racing that leads the Teams’ championship, with its drivers having won one race apiece. Franco Girolami leads the Drivers’ standings thanks to his win in Race 2 in Portimão and P2 in Le Castellet’s Race 1, while Tom Coronel’s victory in the first French race means he is in second place and Viktor Davidovski claimed his maiden win in Race 2 at Le Castellet.

The only other driver to have won a race in 2022, Jack Young, is keen to repeat his victory in the season’s opener in Portugal, while his Halder Motorsport teammate Mike Halder and Brutal Fish Racing’s Pepe Oriola are hungry to give the Honda Civic another win.

The leading Hyundai Elantra N driver in the series is Target Competition’s Josh Files in eighth position; the 2019 TCR Europe champion is still looking for his first podium finish. His teammates Nicola Baldan and Felice Jelmini are 11th and 12th and both have recorded top-three finishes. The two Elantra cars of the Janík Motorsport team, driven by Mat’o Homola and Jáchym Galáš, are also yet to deliver the kind of form the team demonstrated in pre-season testing.

The field grows to 23 cars thanks to the arrival of five new drivers.

Burton will drive a Peugeot 308 for his own team Burton Racing; his only previous experience in TCR competition dates back to 2019 when he finished sixth in the TCR Spa 500 race. After running an Audi RS 3 LMS II for Luís Cidade in the season opener at Portimão, Èlite Motorsport rejoins with Butti who will take part in all the remaining events.