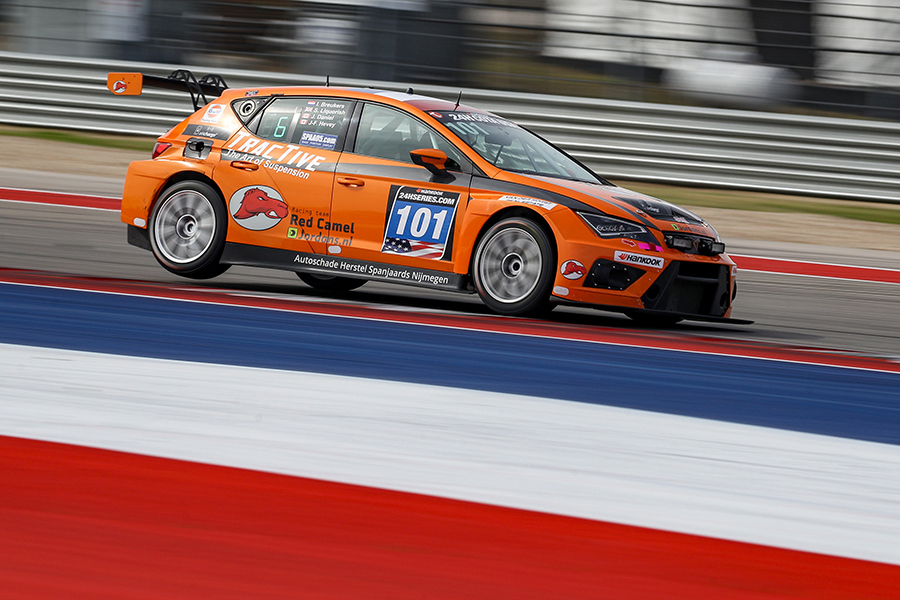 The Red Camel-Jordans.nl CUPRA won the final round of the 24H TCE Series, the 24H COTA at the Circuit of the Americas in Texas.
Canada’s Jérimy Daniel drove the car run by the Dutch team to take the chequered flag after sharing driving duties with his fellow countryman Jean-François Hevey, Ivo Breukers from the Netherlands and the Englishman Steven Liquorish. They completed 546 laps of the 5.5km Formula 1 Grand Prix track and finished an impressive ninth overall.
Including the standalone TCR Spa 500, this result marked the third victory of the season for the Dutch outfit that luckily suffered from a broken shock absorber during a Full Course Yellow period and so had the opportunity to pit and replace it without losing too much time.
Despite running out of fuel earlier in the race and dropping out of the top five in TCE, the AC Motorsport Audi RS 3 LMS of Stéphane Perrin, Vincent Radermecker, CTCC title contender Matthew Taskinen and Will Neal recovered to finish runner up. The Autorama Motorsport by Wolf-Power Racing Volkswagen Golf GTi driven by Jérôme Ogay, Constantin Kletzer, Roberto Ferri, Alberto Vescovi and Yannick Mettler completed the podium. The points awarded for the third place meant that the Swiss team secured the TCE title in the 24H Series Continents championship, adding it to the one already won in the European championship.