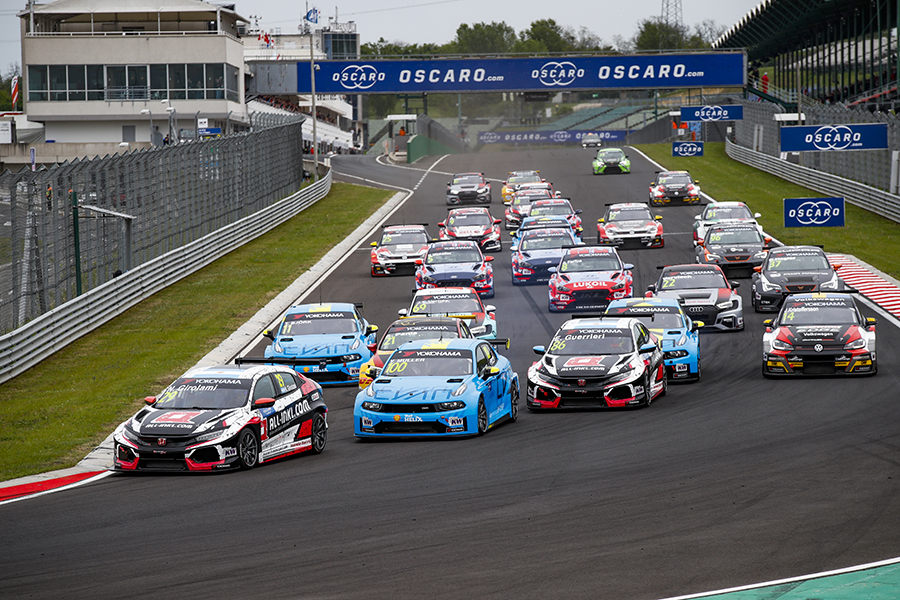 The WTCR races in Hungary one week after Slovakia

The WTCR returns to action at the Hungaroring, only a few days after the previous races at the Slovakia Ring.
Despite a difficult weekend in Slovakia, where the Lynk & Co cars struggled to find the pace, Yann Ehrlacher was able to score points in the three races and so retained the leadership in the standings that have been completely reshuffled behind him. Néstor Girolami (Münnich Motorsport, Honda Civic Type R), who was second before last week’s races, lost fourth place in Race 1 to his teammate Esteban Guerrieri and then crashed in Race 2 after making contact with Jean-Karl Vernay. He could not even start in Race 3 and as a consequence dropped to seventh in the standings.
Ehrlacher’s closest competitor is now Tom Coronel (Comtoyou Racing, Audi RS 3 LMS) who claimed his maiden WTCR win in Race 2 and so reduced his gap from the leader to 21 points. The Dutchman is followed by his teammates Gilles Magnus and Nathanaël Berthon who are 31 and 35 points behind Ehrlacher, while Guerrieri has moved into the fourth position, on equal points with Berthon.
At the Hungaroring, the reigning champion Norbert Michelisz (BRC Racing Team, Hyundai i30 N) and his young countryman Attila Tassi (Münnich Motorsport, Honda Civic Type R) will try to benefit from the advantage of the home ground to claim their maiden victory of the season.
The WTCR will also welcome José Manuel Sapag and Nico Gruber for their maiden appearance in the series, both at the wheel of Hyundai i30 N cars.
The Argentine Sapag will race for Target Competition, one week after his debut in the TCR Europe series at Barcelona, in which he has scored points twice: 12th in Race 1 and 8th in Race 2. Gruber, who made his TCR debut at the beginning of the year in TCR Malaysia, winning at Sepang on his second race, is currently seventh in TCR Germany with a victory in the season opening round at the Lausitzring. The Austrian will replace at Team Engstler Nicky Catsburg who is unable to take part due to a previous commitment.