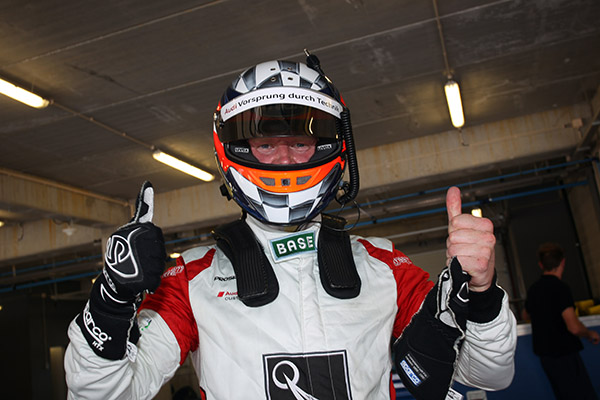 Qualifying for the seventh round of the TCR International Series took place in brilliant sunshine and temperatures of 27 degrees Celsius at the Autódromo Internacional Algarve near Portimão on Saturday – and saw Nicki Thiim walking away as pole-setter after posting a best time of 1:53.863 in the all-important second session.
Thiim celebrates his TCR debut this weekend in Portugal and immediately made an impact on the series. At the wheel of his Liqui Moly Team Engstler Audi TT, the Danish ace set the pace in both qualifying sessions, relegating Jordi Gené and Pepe Oriola in their SEAT León cars from Team Craft-Bamboo Lukoil, to second and third on the grid.
With Lorenzo Veglia putting another SEAT in the top-five, after posting the fourth-fastest lap time, Kelvin Van der Linde completed a very positive overall result for the Audi TT cars and Liqui Moly Team Engstler by finishing fifth.
Championship leader Stefano Comini will start the first of the two races in Portimão from seventh, one place behind Gianni Morbidelli in his Honda Civic TCR.
Morbidelli’s team-mate Kevin Gleason qualified tenth and won pole position for Race 2 on the top-ten reverse grid.
Sunday’s races will go green at 12.35 and 14.05 local time, with a distance of 13 laps each.

Qualifying 1: Thiim leads the way in his Audi TT
After his third flying lap Nicki Thiim appeared at the top of the timesheet for the first time - and successfully defended this position until the end of the 20-minute session. With a time of 1:54.172 he was a dominant 0.681 seconds quicker than Team Craft-Bamboo Lukoil’s Pepe Oriola (1:54.852) in the SEAT León. However, the gap between P2 and P3, which was secured by Oriola’s team-mate Jordi Gené, was just a mere five thousandths of a second.
The third Craft-Bamboo Lukoil driver, Sergey Afanasyev (1:55.094), came fourth, followed by Kelvin Van der Linde (1:55.132), the second TCR newcomer within the ranks of Liqui Moly Team Engstler in an Audi TT. The SEAT cars of Michel Nykjær, Andrea Belicchi and championship leader Stefano Comini also made it into Q2, the same went for Honda drivers Gianni Morbidelli and Kevin Gleason. Francisco Mora and Lorenzo Veglia in their SEAT Leóns completed the top-12.
Oscar Nogués was 13thand the first of the driver not allowed to Q2, kicked off by Veglia in the very end of Q1.
The following drivers advanced to Q2: Thiim, Oriola, Gené, Afanasyev, Van der Linde, Nykjær, Belicchi, Comini, Morbidelli, Gleason, Mora, Veglia

Qualifying 2: Invincible Thiim claims maiden TCR pole position
In the second qualifying session, Nicki Thiim once again took the early lead after posting a time of 1:53.863 on his second flyer. This time turned out to be unbeatable for the rest of the field in the ten-minute qualifying session. Jordi Gené emerged as Thiim’s closest rival in Q2, setting a time of 1:54.621 minutes. The Spaniard will share the front row with the Liqui Moly Team Engstler driver tomorrow. Third position was claimed by Pepe Oriola (1:54.699). Thanks to a considerable improvement in Q2, Lorenzo Veglia secured fourth on the grid. Comini had to make do with P7, one place behind the second-placed man in the Drivers’ Championship, Gianni Morbidelli.
Kevin Gleason finished tenth (1:55.369), winning pole position for Sunday’s second race.