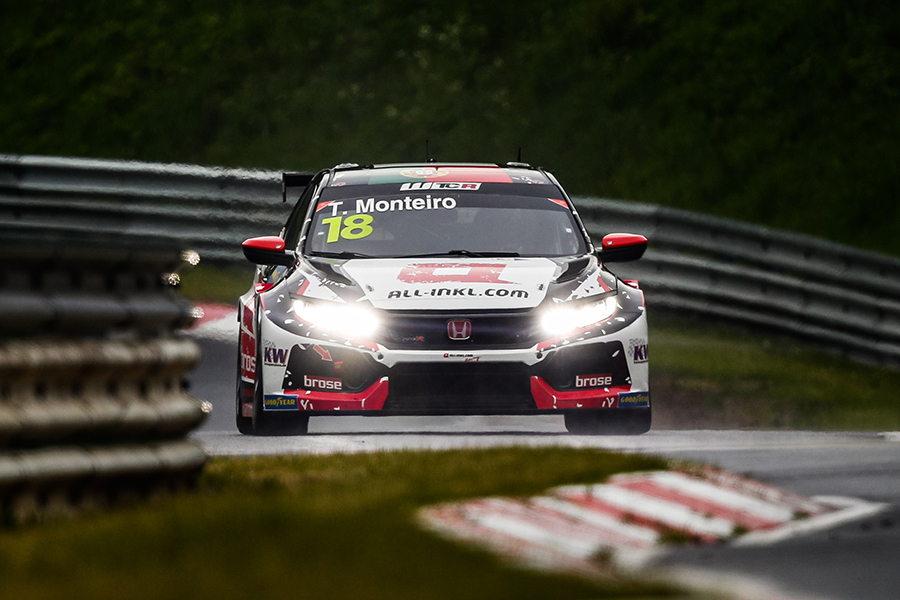 Tiago Monteiro has won the first race of the 2021 WTCR season, grabbing victory from earl race leader Yvan Muller at the Nordschleife’s Döttinger Höhe straight on the final lap to take his second career WTCR success.
Muller started the race from pole position in his Cyan Racing Lynk & Co 03 ahead of reigning champion and nephew Yann Ehrlacher, and the two held station into the first corner, while Norbert Michelisz was forced wide in his BRC Racing Team Hyundai, Elantra which allowed teammate Gabriele Tarquini up to third.
Santiago Urrutia moved up to fourth behind Tarquini, with Tiago Monteiro the leading Honda driver in fifth at the end of the first lap.
The action heated up on lap two, with Tarquini slipstreaming past Ehrlacher’s Lynk & Co early around the Nordschleife, before lining up a move on Muller at the Döttinger Höhe straight. While Tarquini pulled off the move and briefly led the race, he immediately went wide and this allowed Muller straight past, with Urrutia going down the inside into Turn 1. With Tarquini running wide and following a bit of a squabble into the corner, Monteiro emerged in second, while Tarquini and Ehrlacher were shuffled down the order.
Out onto the Nordschleife for the final lap, Muller was leading Monteiro’s Honda, with Urrutia third. Monteiro pulled out of Muller’s slipstream at Döttinger Höhe and sailed past the Lynk & Co into the lead, winning the race by half a second.
Muller had to settle for second ahead of Urrutia, while Race 2 pole-sitter Néstor Girolami had a cautious race on the way to ninth position.
“I tried to be smart on that one,” said Monteiro. “I was really banged up on the first lap, but I kept my focus as it’s still a very long race. I saw the opportunity when Gabriele tangled at the first corner. When you have a plan and everything works out, that’s how it is. I’m very happy to start the season like this.”
Monteiro leads the championship on 25 points, five ahead of Muller, and six ahead of Guerrieri. Race 2 gets underway at 10:20 CEST.