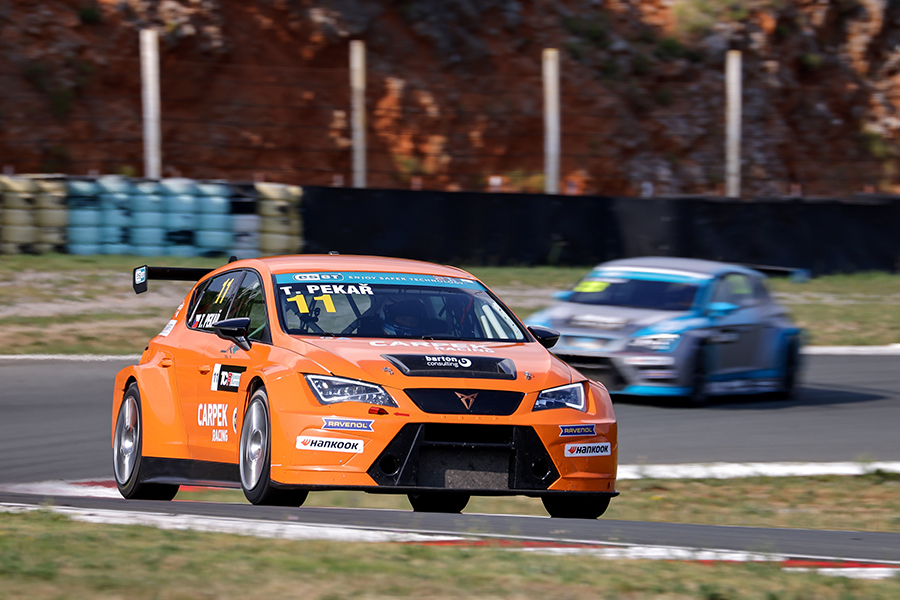 Tomáš Pekař scored his fourth victory in the current season of TCR Eastern Europe at the end of an eventful second race at Automotodrom Grobnik in Croatia. The win meant that Pekař retook the leadership in the standings, six points clear of Michal Makeš who was classified sixth in the race after causing an incident that eliminated Race 1 winner Milovan Vesnić and Sebastian Steibel.
The pole-sitter Petr Čížek stalled the engine at the start, while Steibel sprinted from P2 to take the lead from Makeš. At the back of the grid, Giacomo Ghermandi and Zarko Knego came together, Ghermandi hit Sebastian Kołakowski’s Honda that spun and collected both Knego’s CUPRA and Łukasz Stolarczyk’s Audi.
The race was immediately red-flagged and the surviving cars – including Ghermandi’s CUPRA – returned to the starting grid in the original order
Keeping his position Čížek, had another chance to make good use of the pole and this time he took a perfect getaway, leading from Pekař who jumped from P3 on the grid to second ahead of Steibel. On lap 2, Vesnić overtook Steibel for third, but at the beginning of lap 3 Makeš tried to pass both Vesnić and Steibel into Turn 1; he braked too late and went straight, forcing his two rivals to do the same for avoiding crashing into each others. The three cars landed onto the gravel; only Makeš could rejoin the race, while Steibel and Vesnić had to give up. After the race he was given a 30-second penalty that dropped him from fourth to sixth.
Just a couple of laps later, Turn 1 proved also fateful for the race leader, as Čížek went off and retired.
Pekař inherited the lead and during the final laps he controlled Bartosz Groszek who was closing the gap after having won the fight for second place with Carol Wittke.
TCR Eastern Europe will resume at Slovakia Ring, August 21/22.