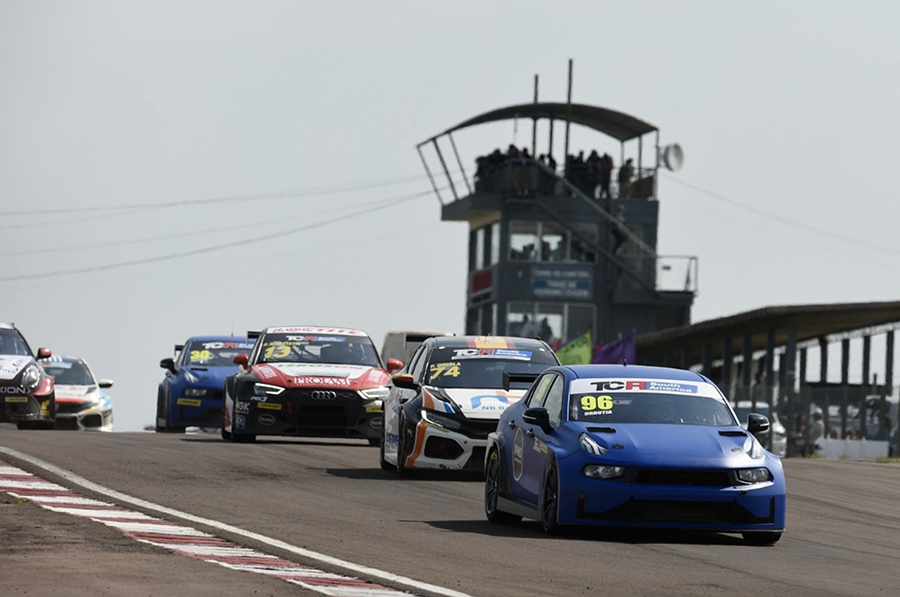 Santiago Urrutia and Pepe Oriola have taken a win each in the TCR South America series races at the Autódromo de Rivera in Uruguay, with Urrutia providing his home crowd with a popular win in Race 1, before Oriola’s Race 2 victory, which helped the Spaniard to extend his lead in the standings.
In the first race, Urrutia led the way from pole ahead of Oriola, while there was drama for Oriola’s W2 Racing teammate Raphael Reis, who was tipped into a spin and out of fifth at the first corner by the PropCar Racing Alfa Romeo of Fabricio Larratea.
During the opening laps, the Scuderia CJ Hyundai Elantra of Rodrigo Aramendia was fighting to keep back the Squadra Martino Honda of Cyro Fontes to hold third, but Fontes eventually made his way past on lap four at the chicane.
Aramendia was now left leading a frenetic battle pack of cars which chopped and changed position constantly. In this pack, the two rival Honda cars of Reis and Ayrton Chorne came together on numerous occasions, with both cars sporting significant bodywork damage.
All the fracas allowed Rodrigo Baptista to sneak through, and the title contender was up to fifth at mid-distance despite starting from 13th and last following a clutch failure in Practice.
Baptista then caught and passed Larratea for fourth, which soon became third when the safety car was called on lap 12, with Fontes’ Honda having stopped on circuit while running in third.
The race was restarted with four laps to go, and Urrutia was put under pressure for the lead by Oriola as the rest of the pack again dropped away. The Uruguayan was able to hold Oriola at bay to secure victory on his and Lynk & Co TCR South America debut.
The Honda of Gonzalo Reilly span out of seventh place at the exit of Turn 5 with three laps to go, with double-waved yellows used instead of calling for another safety car.
Baptista dropped out of third unsighted with two laps to go, which promoted the second of the PMO Motorsport Lynk & Co cars of Pablo Otero to third, with the battle-scarred Honda of Reis scoring an unlikely fourth place ahead of Baptista.
In the second race, Adalberto Baptista started from the reversed grid pole position in his Cobra Racing Audi RS 3 LMS, but he was passed off the line by Otero.
Oriola and Urrutia were immediately up to fourth and fifth, helped in part due to three non-starters from the earlier race – the Squadra Martino Honda cars of Fontes, Reilly and Chorne – and the two drivers quickly passed Larratea for third, before getting of Adalberto Baptista at the end of lap two.
Oriola then cruised up to the rear of Otero car and was briefly part of a Lynk & Co sandwich, before he was able to get past Otero on lap four, with Urrutia following him through.
Oriola and Urrutia then began to pull away, with the Spaniard under constant chase from the Uruguayan. Otero was later under threat from Larratea just as the safety car was called on lap 12 for two laps.
The race restarted on lap 14, but the threat to Oriola immediately vanished as Urrutia slowed out of second place and headed into the pit lane with a power steering issue, promoting Otero to second and Larratea to third.
On the final lap, a charging Rodrigo Baptista was able to get past both Larratea and Otero to grab second, with Larratea also getting past Otero to deprive him of the final podium spot.
Oriola has now extended his championship lead to 25 points over Rodrigo Baptista heading to the next event, which is scheduled to take place again Uruguay, at El Pinar’s Autódromo Víctor Borrat Fabini on October 2-3.