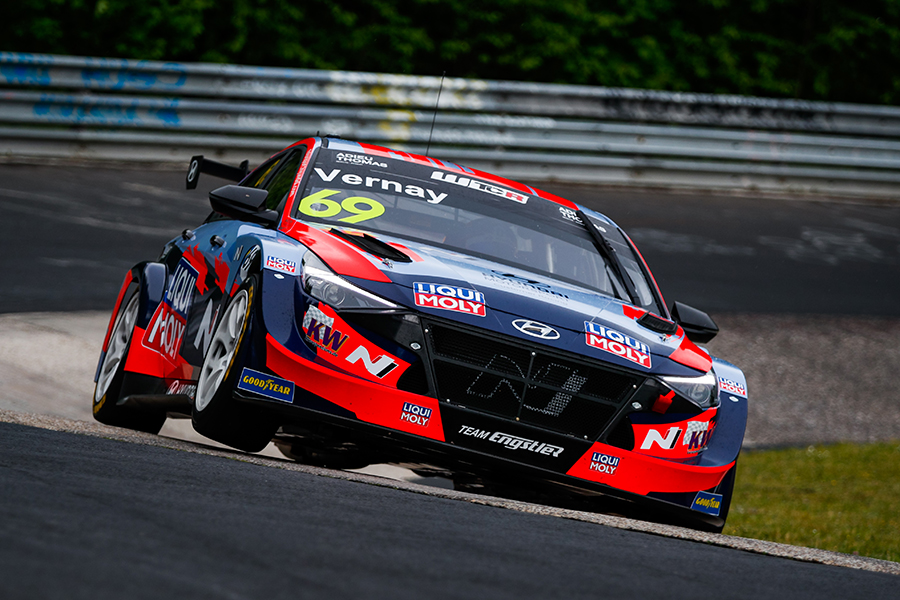 Jean-Karl Vernay has taken his first win with Hyundai in the WTCR second race of the weekend at the Nürburgring, leading an Engstler Motorsport 1-2, with Luca Engstler right behind him at the finish, as the two Hyundai Elantra N cars dominated.
There was drama before the start as Esteban Guerrieri’s Honda failed to get away for the formation lap and was forced to start from the pit lane instead of his allocated third position on the grid.
Néstor Girolami started from pole in the sister Münnich Motorsport car but had a sluggish getaway and was quickly passed by Vernay. Girolami then cut across the track to try and cover off Engstler, forcing the German wide, but to no avail, with Engstler moving up into second and Girolami just managing to hold on to third ahead of Santiago Urrutia into Turn 1.
There was trouble further back as the Hyundai of Norbert Michelisz was spun by the CUPRA of Mikel Azcona at the exit of Turn 1, while the other CUPRA of Rob Huff was also spun by the Hyundai i30 N of Andreas Bäckman. This in turn saw Huff’s car spin into Azcona, before the Spaniard was hit again by Bäckman. Azcona, Michelisz and Bäckman were immediately out of the race, with Huff coming into the pits to retire at the end of the lap.
Meanwhile, the two Hyundai cars were pulling away from Girolami up front, while Attila Tassi was on the move, with the Hungarian driver passing four-time champion Yvan Muller for fifth at Döttinger Höhe.
Tassi would make up one more spot, passing Urrutia at the end of lap two, while the two Hyundai cars of Vernay and Engstler were nose-to-tail throughout the final lap.
Engstler made his move at the Döttinger Höhe straight, pulling out from the slipstream of Vernay and was poised to take the lead, before the team ordered him to fall back in line and let Vernay to take the win.
Vernay took the chequered flag just four-tenths of a second ahead of Engstler, while the two drivers were 12 seconds clear of Girolami, whose aggressive start is under investigation by the stewards.
Vernay assumed the lead of the drivers’ standings on 39 points, six clear of Monteiro and Girolami who are joint-third, heading to the next event at the Estoril circuit in Portugal on June 25/27.