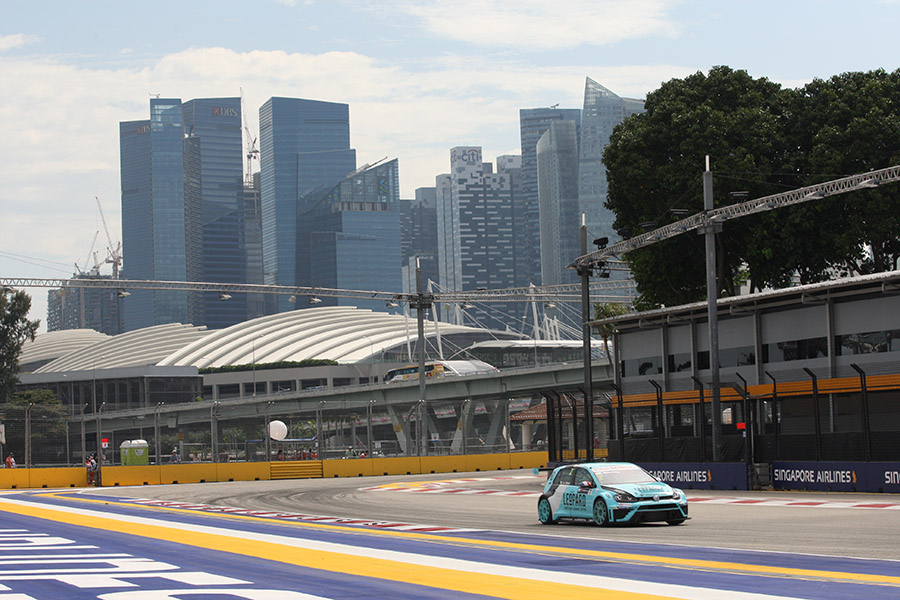 Vernay outpaces the field in Practice

The Leopard Racing’s duo of Jean-Karl Vernay and Stefano Comini topped the time sheet in Practice on Singapore’s Marina Bay Street Circuit. At the wheel of their Volkswagen Golf Gti cars, they posted the two fastest laps in the 40-minute session. But Vernay was the most impressive, as he outpaced the rest of the field by one second.
In the early stages, Dušan Borković (2:28.992), Comini (2:28.889) and Pepe Oriola (2:27.656) set provisional fastest laps, then, with 13 minutes left on the clock, Vernay clocked an impressive 2:25.570 that no one was able to match.
Comini improved to 2:26.572 and climbed to second place, one second behind his teammate and 57 thousandths faster than Borković’s 2:26.629. Mikhail Grachev’s was classified fourth (2:26.791) and fastest of the Honda cars, ahead of Pepe Oriola (2:26.817).
Gianni Morbidelli ranked seventh (2:27.070) after the WestCoast Racing mechanics worked to change the rear-suspension set-up, while current championship leader James Nash was 11th fastest (2:28.127) with returnee Kevin Gleason in 12th (2:29.094).
Jordi Oriola placed his Opel Astra in 13th position, as the team was struggling to fix a problem with the gearbox hydraulic piping. FRD Motorsport worked on tuning and setting-up the new Ford Focus and eventually Martin Cao managed the 15th fastest lap.
The engine of Petr Fulín’s Alfa Romeo Giulietta was working on three cylinders only and the Czech driver could not achieve anything better than 17th place, behind Rafaël Galiana, whose Honda Civic suffered from overheating. For the whole session the Liqui Moly Team Engstler worked to fix electrical bugs on Filipe de Souza’s Volkswagen, but without success.
The Qualifying session will kick off tomorrow at 14:40 local time.