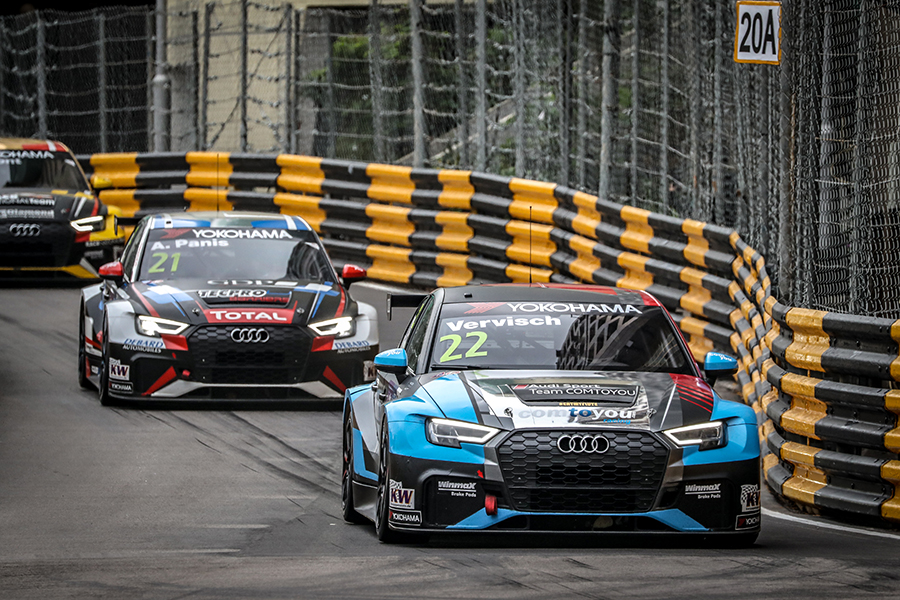 Frédéric Vervisch claimed his and Comtoyou Racing’s maiden WTCR victory in Macau’s Race 2, while Yvan Muller finished third and closed further the gap in the standings from Gabriele Tarquini.
The Italian was eliminated in a pile up after the start and saw his leading margin cut down from 33 to 18 points. However, Muller still needs to finish on the podium again in Race 3 to prevent his fellow Hyundai colleague from being crowned champion.
At the start Timo Scheider made good use of his pole position to take the lead from Vervisch, Ceccon and Muller.
As the field got to the Lisboa bend, Pepe Oriola and Yann Ehrlacher made contact and spun, causing a pile up that eliminated some of the top guns: Tarquini, Oriola, Race 1 winner Jean-Karl Vernay, Rob Huff, Norbert Michelisz and Thed Björk.
On lap 4, Vervisch overtook Scheider for the lead and Muller passed Ceccon for third. The first four positions remained frozen until the end as Scheider was able to reject all attempts from Muller and Ceccon resisted a final assault from Esteban Guerrieri.
The title fight between Tarquini and Muller will be decided in Races 3 that starts at 11:00 local time (4:00 CET); Huff will be on pole, with Guerrieri alongside him. Muller will start 6th and Tarquini 14th.