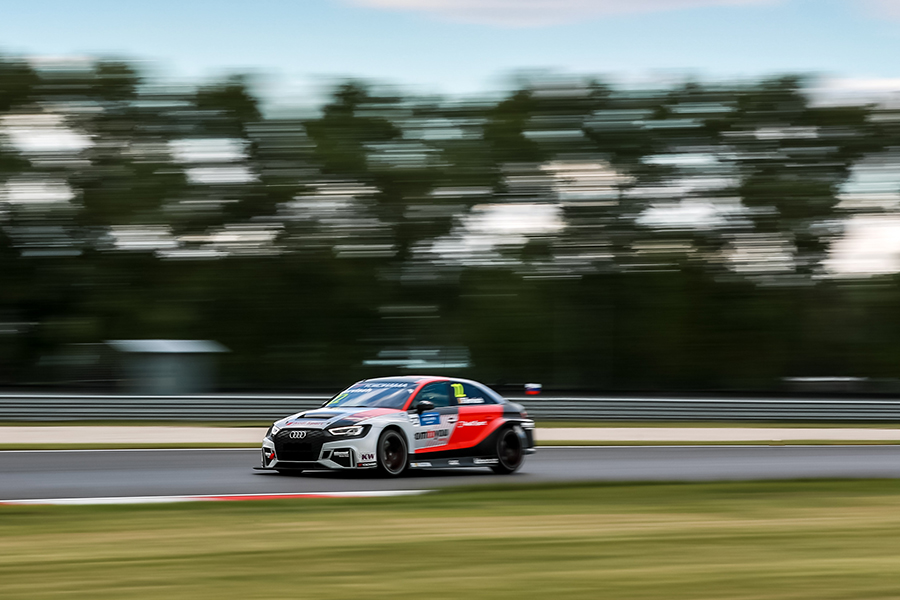 Frédéric Vervisch gave Comtoyou Racing and Audi their first win in the 2019 WTCR, as he won the first race at the Slovakiaring beating an impressive Ma Qing Hua and Norbert Michelisz.
The championship leader Néstor Girolami was eliminated in an incident during the first lap, which helped his teammate Esteban Guerrieri and Gabriele Tarquini to close the gaps in the standings to 8 and 11 points respectively.
Ma was the fastest at the start and from the third spot of the grid took the lead into T1 from Tom Coronel and Michelisz, while pole sitter Nicky Catsburg went wide and dropped to sixth.
During the opening lap Niels Langeveld and Esteban Guerrieri made contact and rejoined at the back, while Girolami and Kevin Ceccon went off after a collision and prompted the safety car into action.
When action resumed on lap 4, Vervisch began threatening Ma’s leadership and eventually overtook him on lap 5. For the rest of the race Ma was under pressure from Michelisz, but he managed to keep him at bay until the end, claiming the first podium result of the season for team Mulsanne.
Behind the three leaders, Jean-Karl Vernay moved up to fourth, but was then unable to stay in contact with the Ma-Michelisz pair. Augusto Farfus and Tarquini were classified fifth and sixth, while Catsburg finished seventh just in front of Coronel and Mikel Azcona. Luca Engstler rounded off the top ten on his first appearance in the World Cup.
Race 2 will start at 15:15 with Rob Huff on pole position and Néstor Girolami alongside him at the front of the top-ten reverse grid.