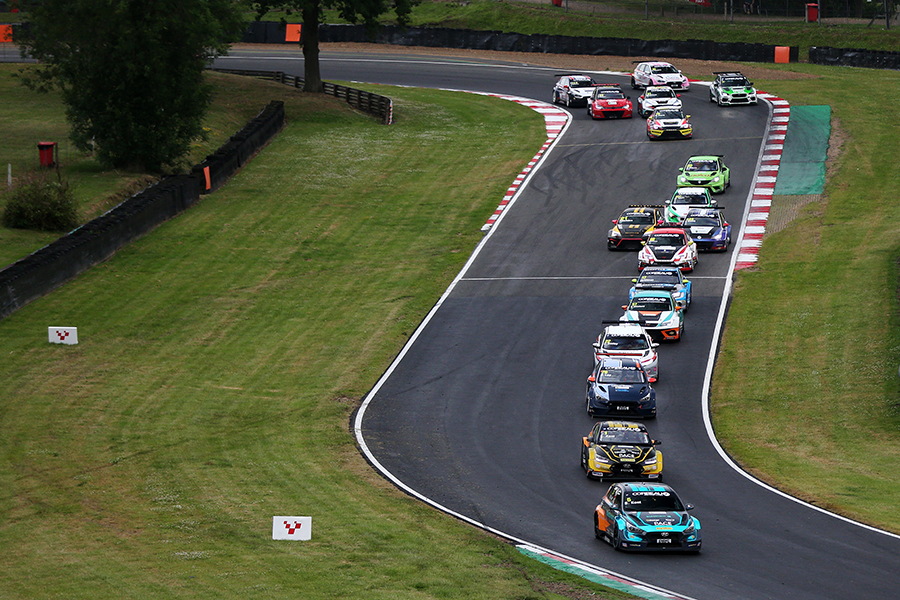 Victories for Lewis Kent, Constable and Ley in TCR UK

Lewis Kent, Jac Constable and Alex Ley took one race win apiece in TCR UK at Brands Hatch. As far as the championship fight is concerned, Max Hart has retained the leadership, 21 points clear of Isaac Smith, while the reigning champion Lewis Kent moved up to third, seven further points behind.

Bradley Kent sprinted from the pole at the start of Race 1, as the rain began to fall. During the first lap Steve Gales crashed and Jamie Tonks spun off; the race was red-flagged and all drivers changed to wets. When action resumed, Bradley Kent led from his brother Lewis, Chris Smiley, Ley and Bruce Winfield. Lewis overtook Bradley in lap 3, and Smiley followed, moving into P2. Bradley Kent began to drop; both Ley and Smith passed him and then Smith overtook Ley for P3 just before the safety car was deployed when Darelle Wilson clashed with Jessica Hawkins. When the neutralization was over, Callum Newsham passed Ley and Smith to grab third. He closed in on the leaders and by the end of lap 14 the top three were covered by less than a second. Lewis kept his rival at bay scoring the first TCR UK win for the Hyundai Veloster, and Newsham was unable to find a way ahead of Smiley.

In the second race, Constable fought hard with Bradley Kent and fellow front-row starter Anthony Whorton-Eales. The latter led for the first 13 laps at the wheel of his Subaru, before both he and Constable were passed by Bradley Kent. The Subaru then dropped down before retiring. Kent and Constable continued their fight until Kent lost three laps in the pits to solve a technical issue. This left Constable to take his third TCR UK victory ahead of Smith who recovered after having dropped to the middle of the field in the early stages of the race. Lewis Kent rounded out the top-three ahead of Bradley Hutchison, Hart and Newsham, while Smiley retired at mid race.

The third race was red-flagged right after the start, after Russel Joyce, Neil Trotter and Steve Gales came together. At the restart Ley and Bradley Kent led the field from the front row, followed by Lewis Kent and Adam Shepherd, while Newsham and Constable went off in different places of the track. The safety car was deployed to recover Constable’s car from the gravel. Racing resumed in lap 9 and Hart overtook Whorton-Eales and Smiley moving into P7, while Tonks skidded off the track. In lap 15, Shepherd overtook Lewis Kent for P3 and one lap later Hart moved into P6 passing both Whorton-Eales and Smiley. During the final laps Smiley and Winfield delivered a thrilling battle for eighth, swapping positions at every lap. Up front, Ley increased his leading margin and claimed his maiden win in the championship ahead of Bradley Kent, Shepherd and Lewis Kent. However, Bradley was then dropped to 15th by a 15-second penalty for track limits.