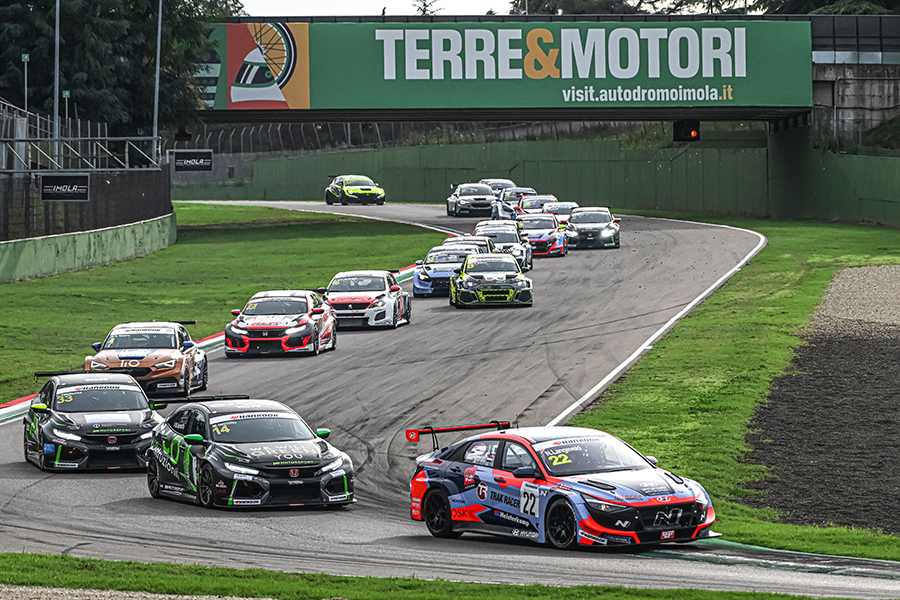 Victories in TCR Italy at Imola for Langeveld and Babuin

Niels Langeveld and Denis Babuin were victorious in TCR Italy’s races at Imola. The Dutchman drove his Target Competition Hyundai Elantra N to a lights-to-flag win in Race 1; it was Langeveld’s third success in the season. In Race 2, Babuin took his maiden victory at the wheel of the Bolza Corse-run Audi RS 3 LMS, passing Matteo Poloni’s identical car at the end of the penultimate lap.

Race 1 – Marco Iannotta had set the pole, from Langeveld and Carlo Tamburini, with Tavano sixth. Langeveld made the best start and led from Iannotta, Tamburini and Tavano, but the safety car was deployed at the end of lap 1 to recover Ruben Volt’s Honda Civic from the gravel of the Villeneuve chicane. Racing resumed in lap 3; Babuin and Felice Jelmini overtook Jimmy Clairet for sixth and seventh, while Mattias Vahtel passed Tavano for fourth. In lap 5, Tavano dropped to sixth behind Babuin, but soon afterwards Babuin retired with a technical issue. Up front, Langeveld and Iannotta were comfortably running first and second, while Tamburini defended P3 from Vahtel who was followed by Tavano, Jelmini, Clairet and Nicola Baldan. In lap 9, Jelmini stopped with a flat front tyre; then in lap 13 Vahtel went wide at the Rivazza and dropped from fourth to seventh. The race was red-flagged one lap later after Damiano Reduzzi’s Hyundai Elantra crashed at the Villeneuve. Langeveld won from Iannotta, Tamburini, Tavano and Clairet.

Race 2 – The Audi cars of Poloni and Babuin shared the front row of the partially reversed grid and led the field at the start ahead of Tavano, Cesare Brusa and Vahtel; during the first lap Manuel Bissa’s Honda went off at the Tosa, while Langeveld passed Tamburini for P6. In lap 4, Tamburini spun off at the Acque Minerali after being pushed by Jelmini who received a 25-second penalty. The leading trio of Poloni, Babuin and Tavano were running nose-to-tail, while Clairet joined Vahtel and Langeveld in the battle for P5. In lap 10, Clairet went straight at the Villeneuve while trying to pass Langeveld, then the safety car was deployed after Steven Giacon’s Audi stopped at the Variante Alta with a broken front suspension. The safety car left the track at the end of lap 12, with Clairet aborting another move on Langeveld, while Iannotta pulled over with a technical issue. At the end of lap 14, at the Rivazza Babuin took the lead from Poloni who soon dropped to sixth behind Tavano, Brusa, Langeveld and Vahtel. Babuin took the chequered flag a few inches ahead of Tavano and Brusa, with Langeveld fourth.

With 95 points on offer in the season finale – Vallelunga, September 23/25 – the battle for the title is now restricted to Tavano and Langeveld. The Italian leads by 37 points, but they will have to drop three scores, and after Imola Tavano would drop 15 points and Langeveld 9.