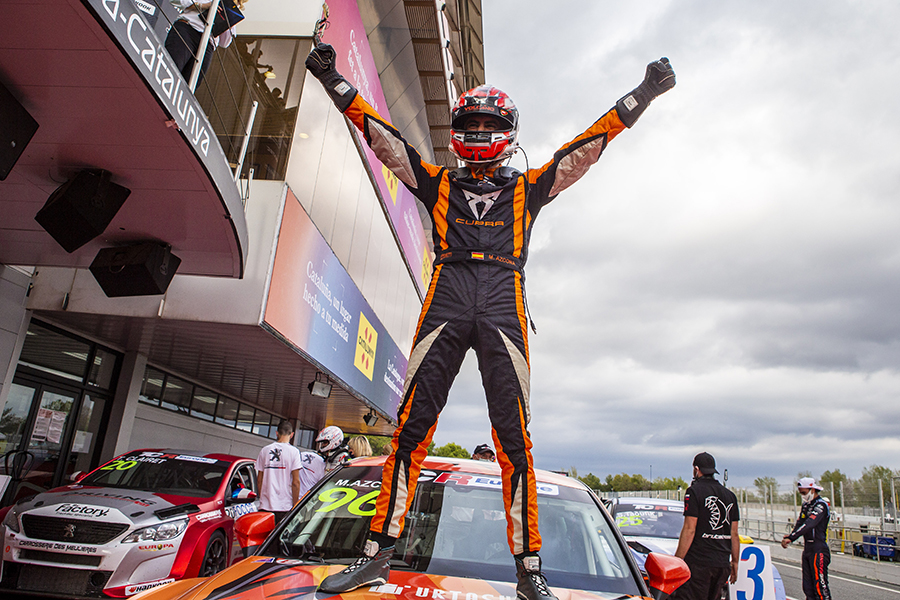 Mikel Azcona took a lights-to-flag victory in Race 1 at Barcelona to record his sixth race win of the year and so secured the 2021 TCR Europe Drivers’ crown with one race in hand – the second time the Spaniard has won the championship after he took the title in 2018. Teddy Clairet came home second while Sami Taoufik completed the podium places.
Starting from pole position, Azcona made a good start and led into Turn 1, while Teddy Clairet passed Taoufik for second away from the grid. Azcona’s only rival for the title, Franco Girolami, started from the back of the grid after a water pump belt problem in Qualifying and he appeared to be involved in an incident on the opening lap in which the Hyundai of Felice Jelmini made contact with Tom Coronel’s Audi. The steering on the Elantra was broken by the contact and that resulted in Jelmini hitting the CUPRA of Felipe Fernández into the gravel. The safety car was deployed while both cars could be recovered.
Racing resumed at the start of Lap 7 and Jimmy Clairet soon passed Evgenii Leonov for tenth place, with the Russian then dropping to 14th. Leonov briefly recovered a position when he passed Mat’o Homola for P13, but a string of cars were battling for positions outside the top ten and Leonov quickly found himself back in P16 when he was passed by Girolami.
The four-way fight for 11th to 14th between Klim Gavrilov, Viktor Davidovski, Homola and Jáchym Galáš would become a five-way contest when Coronel passed Girolami for 15th and joined. Further up the leaderboard, Isidro Callejas passed his Brutal Fish Racing teammate Martin Ryba for sixth, with Jack Young then passing Mehdi Bennani for eighth so that the three Brutal Fish Honda cars were running together. Bennani was then passed by Jimmy Clairet for ninth.
Over the final few laps, the only change to the top ten places was when Callejas passed Niels Langeveld for P5 on the final lap. Azcona then took the chequered flag 1.369 seconds ahead of Teddy Clairet, with Taoufik finishing third. A dejected Girolami eventually finished 17th outside the points, which meant that he is unable to catch Azcona in tomorrow’s final race.
Having accomplished the mission to clinch the title today, the new TCR Europe Champion, will head back to Most for the WTCR event tomorrow in which he will start Race 2 from pole position.
Gavrilov and Callejas will share the front row of the partially reversed grid for Race 2 that will be streamed live tomorrow at 13:45 local time (CEST) on www.tcr-series.com;.