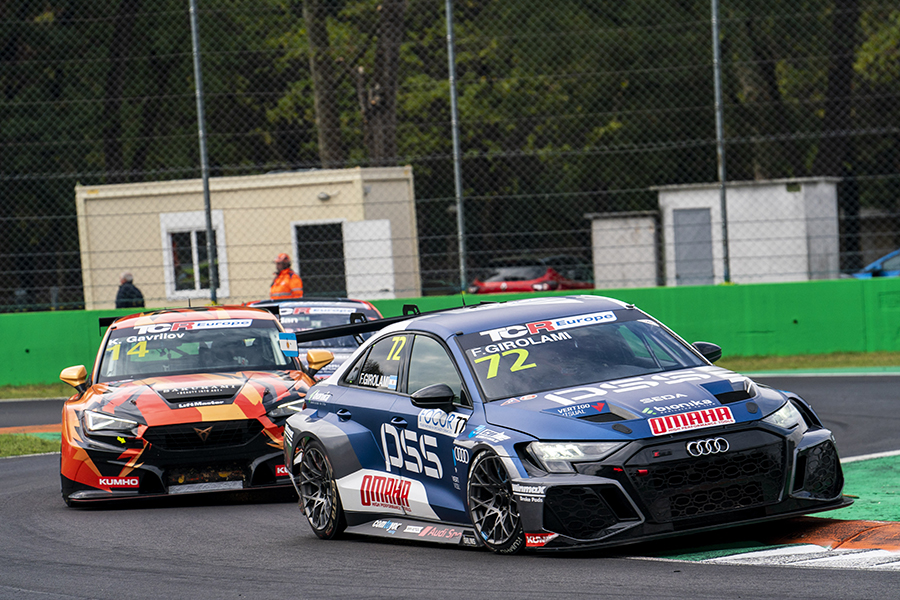 Franco Girolami took his third victory of the season in TCR Europe’s Race 2 at Monza, moving to within a handful of points of securing the Drivers’ title. Klim Gavrilov finished second and Sergio López scored his and the RC2 Junior Team’s best result of the season by completing the podium places in third.

At the start, Girolami quickly passed Felipe Fernández and López to go into the first chicane in second place behind pole-sitter Gavrilov. Behind the leaders, several drivers made up places in the run down to the chicane, including Nicola Baldan who leapt from ninth on the grid to third and later received a 5-second penalty for the infringement.

On Lap 2, Girolami passed Gavrilov for the lead, but when Isidro Callejas was forced to abandon his CUPRA on the kerbs with broken steering, the Safety Car was called into action. Racing resumed on Lap 5 and immediately there was contact between Michele Imberti and John Filippi going into Turn 1.

A great three-way battle developed between Felipe Fernández, Imberti and Jack Young, with Fernández passing Imberti for fifth place on Lap 10 and Young first passing Imberti for sixth and then Fernández for fifth before he dropped back behind the pair once again. In lap 11, Paolo Rocca’s Honda Civic hit the wall at the exit to the Ascari chicane and was stranded in the gravel; then the race was red-flagged with just over a lap remaining.

Girolami’s winning margin was just over three tenths from Gavrilov, while Baldan finished third but was dropped to fourth by the penalty which promoted López to third.

In the championship standings, the weekend’s results mean Girolami now has one hand on the trophy. He is 89 points ahead of Files with a total of 96 on offer from the final event of the season in Barcelona. Gavrilov moved into third place ahead of Coronel and Callejas, but the title fight is now a two-way affair between Girolami and Files.

The season will come to an end at Circuit Barcelona-Catalunya on October 13/15.