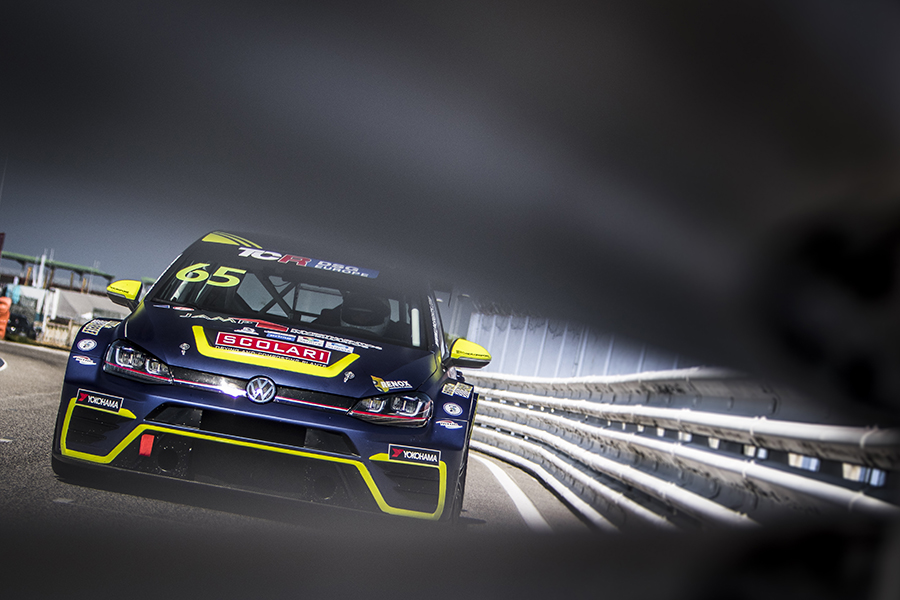 Gabriele Volpato and Rodrigo Almeida won the inaugural round of the new TCR DSG Europe series, leading an Élite Motorsport Volkswagen 1-2 in a strategic race, taking advantage of an early safety car to get the overlap on their team-mates Alfredo De Matteo and Alessandro Altoè, while the pole-sitting Team Italy Audi of Ermanno Dionisio-Giacomo Barri suffered with a drive-through penalty and had to settle in third position.
Dionisio started from pole position, but De Matteo drove straight into the lead; behind Dionisio, there was an intense battle between the NOS Racing Volkswagen of Gabriele Giorgi and Volpato, with the two trading paint on the straight at the end of lap five, which saw Volpato drop two spots behind the BF Motorsport Audi of Ronnie Valori and the Volkswagen of ‘Linos’.
Dionisio then slowed out of second place at the start of lap seven, dropping all the way behind Volpato, just before the now second-placed Giorgi violently crashed out of the race at Turn 14, bringing out the only safety car of the race. Volpato, Dionisio and Nicola Novaglio opted to take an early pit stop during the safety car period, although it was too early for a driver change, but were able to gain time while the field was held back.
The race restarted on lap ten, with De Matteo leading ahead of ‘Linos’ and Piero Necchi’s Tecniengines Audi; De Matteo again started to build a gap to the cars behind him.
The first wave of pit stops completed around laps 25 and 26, with De Matteo pitting from the lead and handing over to Altoè, with Volpato and Dionisio now moving up to first and second. It was just over half distance when Volpato pitted from the lead and handed the lead to the 16-year old Almeida, while Dionisio was in two laps later to hand over his Audi to Barri.
Barri rejoined and very quickly began setting the fastest laps of the race as he tried to close down the gap to Almeida, while Altoè was now in the lead of the race again but was yet serve the car’s second stop. Unfortunately, Barri was then soon hit with a drive-through for a pit stop violation, which cost him the chance to fight for victory.
With just under 25 minutes to go, Altoè pitted from the lead and gave the Golf GTI back to De Matteo, who’d drive the car to the finish; he rejoined 20 seconds behind Almeida who went on to win the race.
Second place went to De Matteo-Altoè, completing a strong 1-2 result for Élite Motorsport, while Dionisio-Barri would have to settle for third. The BF Motorsport Audi of Valori-Palanti finished fourth, with Piero and Edoardo Necchi’s Tecniengines Audi fifth.
The series will resume at Brno on September 5/6.