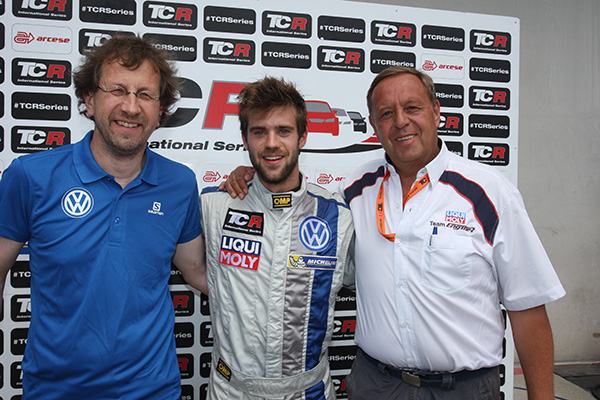 The victory that Pol Rosell claimed in the second race of the TCR International Series at the Red Bull Ring last Sunday, was a reward for Volkswagen Motorsport and the people involved in the Golf TCR project.
The new racing car had completed its first laps only six weeks ago and yet, as soon as it took part in the first sessions on Friday at the Red Bull Ring, it proved competitive.
Rosell posted the third fastest lap in the first Practice, while his Liqui Moly Team Engstler teammate Mikahil Grachev topped the second session. With these premises, the ninth (Grachev) and tenth (Rosell) positions achieved in qualifying sounded a bit disappointing.
However, Rosell was able to convert the pole position on the reversed grid in a brilliant victory, while Grachev finished sixth after getting the worst of a contact with Afanasyev in the fight over the fourth place.

Volkswagen Motorsport Director Jost Capito, enthusiastically commented: “We are delighted about the victory for the new Golf. You cannot ask for much more from a racing car’s debut. At the same time, we are well aware that we still have plenty of work ahead of us. The project is still in its very early stages. However, this success will give everyone involved an extra boost.”