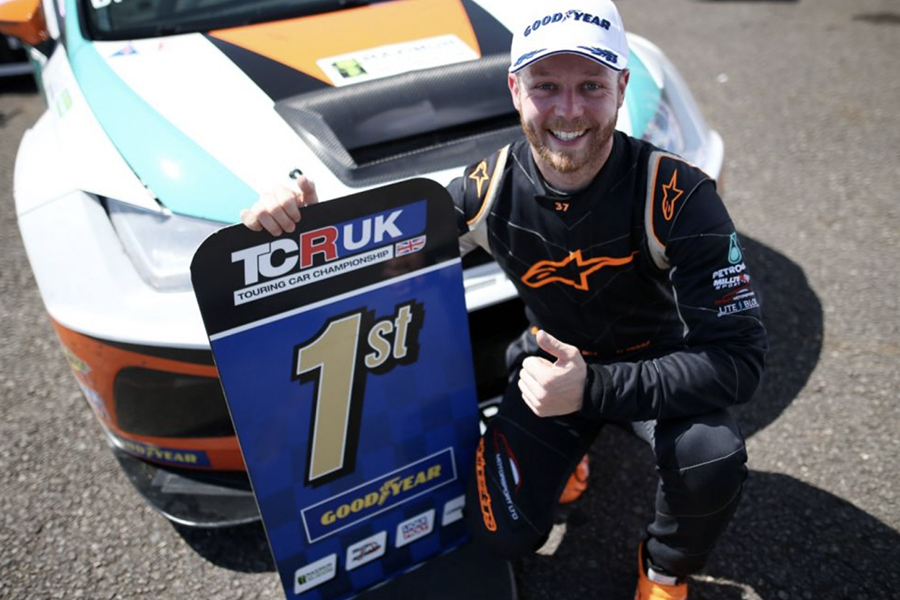 Winfield and Ley are victorious in Castle Combe

Bruce Winfield and Alex Ley shared race wins in the TCR UK event at Castle Combe. Winfield’s victory in Race 1 was the result of a last-corner puncture that deprived his teammate Adam Shepherd of a lights-to-flag win. As for Ley, he finished Race 2 in third place, but was promoted to first by the penalties imposed to Jac Constable and Matthew Wilson.

Race 1 – Pole sitter Chris Smiley stalled at the start, and so Shepherd took the lead from P2, ahead of Winfield, Bradley Hutchison, Isaac Smith, Jessica Hawkins and Max Hart; the safety car was deployed at the end of lap 1, after Jamie Tonks’ CUPRA crashed into the tyre wall. Action resumed in lap 6; Hart overtook Hawkins for P5 and began putting the pressure on Smith who was chasing the third-placed Hutchison. In lap 12, Hart suddenly pitted with a broken driveshaft. The top positions seemed frozen but Shepherd’s Hyundai suffered from a front-left puncture in the final corner and Winfield beat him to the line taking his first win of the year; Hutchison and Smith finished third and fourth ahead of Smiley who completed a strong recovery from the back of the field to fifth.

Race 2 – Scott Sumpton and Constable shared the front row, but Ley took the best start and led after making contact with Sumpton; behind Ley, Constable was followed by Wilson and Winfield who had started from 12thand 10th on the grid. The leading quartet pulled away, while Shepherd moved up to fifth. Hart and Smiley – who had started from the pit lane – recovered to 9th and 10th before Hart retired again with a mechanical failure. In lap 15, Constable took the lead from Ley and the latter lost second place to Wilson in lap 20. Constable was first under the flag, ahead of Wilson, while Ley kept Winfield and Smiley behind to finish third.

However, Ley was declared the winner, as Constable was demoted to third by a 10-second penalty for jump start. The same penalty was also imposed to Wilson who dropped to 9th, while Winfield, Smiley, Hawkins and Smith advanced to second, fourth, fifth and sixth.

In the standings, Smith has retained the lead, but Smiley has reduced the gap to 32 points; Hart dropped from second to fourth, 90 points behind the leader and 15 behind the third-placed Lewis Kent.